Start a Wiki
Flower Power is a game for the DS and 3DS, it is a remake of the game Flower Power 64. The main character of the game is Princess Daisy and the main villains are The Koopatroop and Tatanga The Alien.

Its Daisy's birthday and so far no one has shown up. Daisy goes to investigate in Peach's Castle but all she finds is a video casset and an old video casset player, she puts the video on only to find its a video of Tatanga, "Daisy if you are watching this that means that we have kidnaped your friends and we are going to kill them" Bowser and The Koopalings are kidnaping people in the background. "so Daisy... if you ever want to see you friends alive again you must marry me." the casset ends. Daisy is now crying sat in a chair surrounded by empty ice cream tubs. She stands up and says to her self "NO! I'm not going to cry! I'm strong....I'M STRONG!" as she stands up wipes her tears away and runs of down the street. This is when the game begins.

At the end of the game there is a mini movie, where it is about 20–25 years in the future. Daisy and Luigi have their own daughter called Flora and are married. Mario and Peach have twin boys one called Jake and the other called Tom. Toadsworth and Toad Mary have passed away and so has Tatanga. All the Koopalings have grown up and Bowser has remarried to a Koopa called Jennifer they had one daughter called Lucy Koopa. The Koopas have given up their evil plans and settled down in the Mushroom Kingdom- all except Dolly who moved and became queen of an unnamed icy realm. 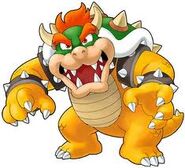 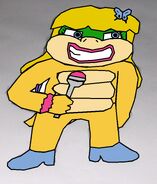 Retrieved from "https://fantendo.fandom.com/wiki/Flower_Power?oldid=3248923"
Community content is available under CC-BY-SA unless otherwise noted.