Start a Wiki
“Our Super-Mighty Leader King Croacus will be Stoked to have a rare breed!”
— Floro Sapiens, Super Paper Mario


Floro Sapiens are plant creatures debuting in Super Paper Mario. They are enemies to both Mario and the Cragnons. They attack the player by throwing their head, which then returns to them like a boomerang.

Like Toads, Floro Sapiens are color-coded according to rank, despite having the same stats. Yellow ones are commoners, red are military generals, and purple are King Croacus' royal guards.

When Mario and his friends went to the land of the cragnons, The Floro Sapiens were kidnapping the Cragnons for reasons mario did not know. However when making his way through the Land of the Cragnons and eventually deep into the Floro Sapien's own Floro Caverns, Mario found out that the Floro sapiens were fighting mario and holding the Cragnons as brainwashed slaves for the reason that the Cragnons were polluting their water by throwing trash into the river. This caused a chain effect of not only making Their king, King Croacus the IV psychopathic and mad. But even to the extent of actually KILLING their own people. So the Cragnons promised to never throw trash within the river ever again and mario gained the 5th Pure Heart from them. Though over time Mario would soon know that not all Floro Sapiens were as forgiving as he'd thought.

In this game the Floro Sapiens return in a plant infestation. A small group of Floro Sapiens wish to get revenge for what Mario did to their king and how he got in the way of their brain washing attempts. So many leave and spread across into places, as Yoshi's Island and other woodland areas spreading their vines and flowers choking other life out of the area. Mario, Yoshi and Luigi so decide to stop the Floro Sapiens' attacks, an save the worlds from a "total plant takeover". But it's going to be tough with Floro Sapiens' commanders such, Lavender and her brother Thornus who will try to stop Mario. Other Floro Sapiens joined the group, though King Croacus, strongly disagreed stating "How can this be a beautiful thing?!" Basically the Floro Sapeins are the prime enemy but they appear in many other stronger sub species. Even though thier Color code doesn't matter about their strength The Common Floro Sapien appears with it's sub species in all 7 worlds, with all three ranks. this could prove even more difficult for mario than he had originally thought. 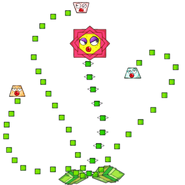 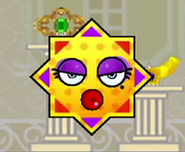 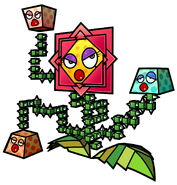 Add a photo to this gallery
Retrieved from "https://fantendo.fandom.com/wiki/Floro_Sapien?oldid=1957957"
Community content is available under CC-BY-SA unless otherwise noted.