Flagman is a Game and Watch game in the Silver series released on June 5, 1980. This game is about holding up flags and memorization.

Game A of Flagman is a memorization game where the player has to remember the pattern of flags held up by the character. After the pattern is shown, a timer appears on the right side of the sceen to show how much time the player has left to input the pattern. If they get it correct, the player scores a single point. The game maxes out at 99 points. If the player gets a flag wrong, one life is lost and the game will end when all three lives are lost.

Game B focuses on quick reflexes. Numbers will appear on the left side of the screen and to score a point, the player must input the number that appears before time runs out. The timer is quicker than Game A. The maximum score that a player can get for this game is 99. Like Game A, mistakes or timing out will result in a loss of one of three lives, of which the game ends after all three lives are lost.

Flagman is referenced in Mr. Game & Watch's moveset through his up tilt attack, Flagman. This move has Mr. Game and Watch swing a flag in front of him and a flag behind him. It combos into itself, making it potentially good for racking up damage at the start of a stick. However it has a noticable amount of lag and poor reach. No matter what side Mr. Game & Watch faces, Flag 1 will always be on the left side while Flag 2 is on the right side. If used in quick succession, the order flips.

A version of Flagman was available in Wario Land II once the player achieved 100% completion- this would not be the last time the Wario series referenced Game & Watch. It was also in WarioWare: Touched! as a microgame called Flagman Game & Watch.

Flagman appears in Nintendo & Fantendo Play: Dodgeball! as a collectible that can be obtained randomly from the Gachaball machine or in Dodgeball Dungeons. It's gameplay is identical to the original game.

The Flagman character appears as a character in Lucky Wars and has a passive buff to his army where he lowers and raises flags that increases their movement speed.

Flagman is once again represented in Mr. Game & Watch's moveset in Super Smash Bros. Charged, being his up tilt.

Flagman is also represented as a Trophy and Spirit in the game. It is an Novice-type Spirit that boosts the damage and knocback to the user's up tilt by 70% when equipped. The Spirit battle is five Mr. Game & Watches that constantly use up tilt. 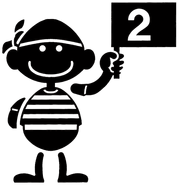 Flagman's Spirit in Super Smash Bros. Charged
Add a photo to this gallery
Retrieved from "https://fantendo.fandom.com/wiki/Flagman?oldid=3198716"
Community content is available under CC-BY-SA unless otherwise noted.