Start a Wiki
“I am Fjorm, princess of Nifl, the Kingdom of Ice. I will not rest until my homeland is restored and I have my vengeance.”
— Fjorm, Fire Emblem Heroes


Fjorm is a character introduced in Fire Emblem Heroes, as a character that joins the player's army during the start of Book II of the Story Maps. She is unlocked by completing the fifth part of chapter 1 Enchantress of the Mist. She hails from the Ice Kingdom of Nifl, which was attacked by Surtr, who hails from the Fire Kingdom Múspell.

Fjorm and her elder sister Gunnthra were princesses of the Ice Kingdom Nifl, ruling alongside their mother, the queen. Shortly before the events of Book II of Fire Emblem Heroes, Surtr attacked and killed their mother and Fjorm attempted to attack him, although was knocked unconscious during the attack. Surtr kept her alive and left her where she was, where she was found by the Order of Heroes.

After being found and nursed back to help, Fjorm joins the heroes to avenge her fallen kingdom and mother.

Fjorm can be somewhat soft-spoken but ultimately her drive is to seek vengeance. She feels in great debt to the Summoner and the Order of Heroes, as well as feeling it accumulate on her as the game progresses. She has a deep love for her homeland.

Fjorm is equipped with a spear called Leiptr that has quite a wide range, able to counterattack foes no matter how distant they are. She also seems to have ice magic and can charge the tip of Leiptr with the ice element.

Fjorm makes her Super Smash Bros. debut in Super Smash Bros. Galactic Battle, where she is an unlockable character. Fjorm's moveset is comprised of icy lance attacks, with many of her animations reflecting her appearance in Fire Emblem Heroes. Fjorm is one of five playable characters to hail from Fire Emblem Heroes, sharing this trait with Alfonse, Shareena, Veronica, and her older brother Hríd, who was also revealed in the same reveal trailer as she was.

Fjorm's appearance in Galactic Battle can be found in her fighter article, while her official reveal can be found here. 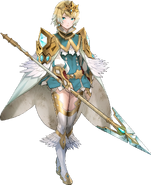 Fjorm in a neutral stance 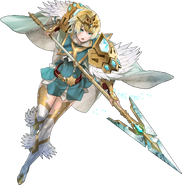 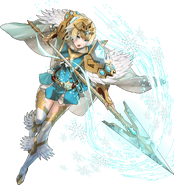 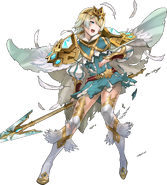 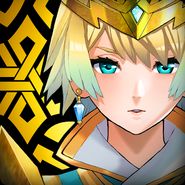 Fjorm in the app icon for Fire Emblem Heroes. 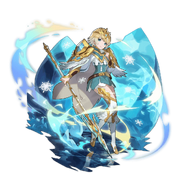 Fjorm in Dragalia Lost
Add a photo to this gallery

Retrieved from "https://fantendo.fandom.com/wiki/Fjorm?oldid=3058830"
Community content is available under CC-BY-SA unless otherwise noted.