Start a Wiki
Fishin' Lakitus are Lakitus that use fishing rods. They appear in the Mario Kart series, as well as a few adventure games and in the Mario & Luigi series.

A single Fishin' Lakitu character appears in a few levels dangling 1-ups (as seen in the image), 3-Ups or 10-Ups. Also, if you die 8 times in a row on one level, he will fly in and dangle an Invincibility Cape in front of you. If you still die two more times, he will fly in with Gina's lamp. In the story, he rescues Gina from Bowser.

A Fishin' Lakitu (probably the same one as Mario 3D World) appears as a playable character in Mario Kart². He is the partner of Gina, and his special item is the Magic Lamp. He is a light character.

Fishin' Lakitu from Mario 3D World appears in the sequel. He is a playable character in one form of multiplayer, where the second player uses A, B, X, and Y to control him. With Y and A, they can move him side to side. With B, he can drop Sky-Blue Spinies, which kill any enemies they hit but don't damage the other hero. With X, he can create Boost Blocks. After hitting X, he uses A, B, X, and Y to move the Boost Block up, down, left, or right (respectively), and the start button to place it. 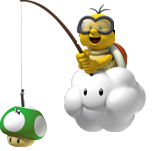 A Fishin' Lakitu holding Gina's lamp, which Gina is emerging from.

Fishin' Lakitu without his cloud, in Mario Kart². 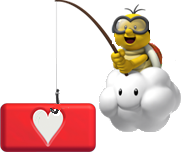 Fishin' Lakitu in Mario 3D World 2: The Dream World.
Add a photo to this gallery
Retrieved from "https://fantendo.fandom.com/wiki/Fishin%27_Lakitu?oldid=2730185"
Community content is available under CC-BY-SA unless otherwise noted.