Fire Snakes (originally phrased as Firesnakes) are semi-common enemies that appear in the Mario series, first debuting in Super Mario Bros. 3. As their name implies, they are long, snake-like enemies composed of fireballs. Their main attack method involves them hopping in arcs to damage Mario. However, their abilities differ from game to game; in Super Mario World, they are a single fireball and leave patches of fire as the hop around, and in the New Super Mario Bros. games, after one or two hops their heads will enlarge to massive size for their next hop, making them more difficult to avoid.

In the Mario Kart series, the Angry Sun is shown spawning Fire Snakes, implying that this is how they are produced.

Fire Snakes appear in Super Mario World U. In the game they jump around and grow larger, making more light in dark areas. They can be defeated by Invincible Mario, Hammer Mario, and Earthquake Mario only if they are touching the ground, Ice Mario, Penguin Mario, Gold Mario, and Mega Mario. Also if they go into the water they will burn out. They usually appear in desert levels, dark underground levels, or volcanic levels.

The Fire Snake appears as a new item in Mario Kart: Infinity Remix. It can be thrown forward or placed behind the player; when active, it will begin hopping around the course in random directions, similar to its behavior as a hazard in previous Mario Kart games. Players will spin out if they touch it. After a while, it will disappear. 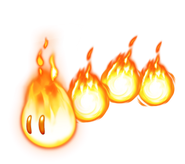 A Fire Snake.
Add a photo to this gallery
Retrieved from "https://fantendo.fandom.com/wiki/Fire_Snake?oldid=3208741"
Community content is available under CC-BY-SA unless otherwise noted.