The Fire Climbers are two kids named Bobo and Gege. When they were kids they were cursed with the power of fire, and to only be good, not evil. They appear in the Legendary Climbers and The Adventures of the Dark Climbers.

The Fire Climbers are very warm people, litteraly! They are genorus, selfless, and will even sacrifise themselves just to save a life. This is shown when they jump in front of the Ice Climbers when The Dark Climbers were going to shoot them with a charged Dark Beam! They also will get angry if you try to hurt a friend or inosent person.

Fire Rock: Summons a small lava rock from the sky to burn enemies.

Fire Hook: Shoots a flaming grapling hook into the air which pulls the climbers up.

Fire Blast: Blasts sideways in a burst of flames

Volcano Time!: Summons a giant volcano which any enemie that was above it falls into the lava. It also burns enimies near it.

The Fire Climbers make their first appearence in The Legendary Climbers. They are the rulers of The Fire Kingdom and they are the playable characters in that world.

The Adventures of the Dark Climbers

The Fire Climbers don't have a big role in this game. Their role is that they both appear in a couple of the Climber Chats, they appear in the opening and closing cutscene, and lends The Dark Climbers fire items if they can reach the transpoter in the fire world.

While they don't have a big role, they appear in a couple of the Climber Chats. They also have been submitted to be an assist trophy. 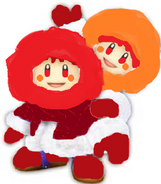 How they normally appear.
Add a photo to this gallery

Retrieved from "https://fantendo.fandom.com/wiki/Fire_Climbers?oldid=1607221"
Community content is available under CC-BY-SA unless otherwise noted.