Fire Bars are composed normally of a single block that can be stood on by the player. Numerous balls of fire float in a line away from the central block and orbit around the block in a circular orbit, creating a wall of fire. This line is usually positioned stategically so that the player is forced to try and avoid the fire or to jump over it.

Fire Bars appear as items in the Super Smash Bros. series, first appearing in Super Smash Bros. for Nintendo 3DS and Wii U. It can be picked up and used as a sword, losing a ball of fire every two uses. As it loses balls, it also loses range, although balls closer to the "hilt" deal more damage (like with Marth's sword).

The Fire Bar appears in Mario Kart: V² Circuit as a new item. Four fireballs swing around your kart, acting somewhat similar to their smash incarnation as it will lose a fireball for each hit it successfully inflicts or dims out slowly over time. They can also defend you against most items that travel across the ground. 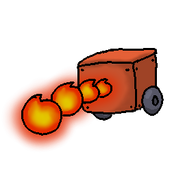 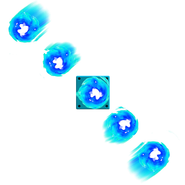 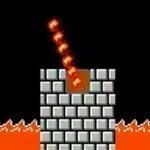