Start a Wiki
Fire & Ice is an upcoming Nintendo Game for the Nintendo 3DS, which is working with a variety of Indie gaming companies to create a unique experience. The game focuses around two characters; Fire and Ice respectively and their journey to run from the oncoming Darkness.

The game is able to be played both as a one player and two player experience with various puzzles being changed to suit the number of players. The player can choose to control Fire or Ice in 1-Player whereas in 2-Player, Player 1 controls Fire and Player 2 controls Ice. There are many differences between the characters aside from aesthetics.

Fire is capable of jumping significantly higher than Ice and is able to light torches, burn rope, melt ice, evaporate water, burn plants or fuse metal. Fire has three attacks, the first uses the B button to summon a Fireball which will travel for a bit before descending, another attack is used by holding the B button which causes the attack to become a Flamethrower which can be used to activate multiple switches at the same time. The final attack which can only be obtained by finding a Golden Flame which changes both attacks to the Fire Wave which causes a ring of fire to surround the player and then spread out rapidly activating any puzzle it makes contact with.

It is important to note that if the game is in two-player mode using attacks on the other player will cause them to melt/dissolve forcing the players to start the stage over again.

Ice is able to run at a much greater speed than Fire. Aside from this Ice can also Freeze Statues, Cool Fires, Solidify Water, Break Electrical Currents and Break Glass. Ice also have three attacks. Ice's B attack causes Ice to shoot a Shard of Ice which travels in the direction it is launched eventually reaching a point where it slows down and explodes. The B Charged attack causes Ice to release homing or targetted Ice Shards based on whether the player is aiming or not. These can be used to activate switches in a particular order. Lastly by obtaining the Crystal Ice item found in various stages Ice can turn into a giant Ice Ball which allows Ice to roll around and activate heavy switches or break certain walls.

The main objective of the game is to reach the safety of the Light Dome, on the way Fire and Ice must traverse a large variety of terrains to get to the Light Dome as well as avoiding the Darkness which influences the creatures of the lands.

The game starts out with Fire looking out from an outpost in a desert. A great chasm in the distance with many chains on it begins to rumble. Fire quickly panics and runs down the lookout post and to the outpost ringing a bell signalling an emergency. Many creatures run out made of sand or stone. They all panic and flee the outpost. The player then gets to control Fire as they escape the outpost. Along the way the player is introduced to the various mechanics and also to the Darkness which initially infects one of the Sand People turning them into Darkness which Fire destroys by shooting Fire at them. Fire continues onto the edge of the desert reaching a giant temple, looking back Fire sees the outpost being consumed by the Darkness. Fire runs inside the temple seeking refuge.

Inside the temple Fire encounters Stone People again however they are also consumed by the Darkness, along the way Fire encounters some torch puzzles which lead to deeper parts of the Temple. Reaching the bottom of the Temple Fire finds a giant structure of a diety. Upon approaching it Fire is stopped by Ice who slashes down at Fire and walks around Fire to see if Fire was consumed by Darkness, coming to the conclusion Fire was not, Ice seals the doors shut using Ice and prepares to leave, however just as Fire and Ice leave through the secret exit Darkness seeps through the ceiling and attaches itself to the Diety which comes to life. Watching in horror Fire and Ice stand back as the Diety seperates its stone arms from its body. By using a Ice to freeze the legs causing it to trip over then having Fire melt and damage the iron core on its head the duo defeat the diety which returns to stone and then crumbles. The darkness however continues to spread and with the original way out sealed off by destruction, Fire and Ice find a cave which they travel through fighting more Stone People consumed by Darkness until they finally get out reaching a lake.

At the lake Fire and Ice see that there are Water People who live in the lake very calmly. Fire and Ice however see a cloud of Darkness rush over from a far away valley, concerned they begin running again and travel past the lake through rocky cliffs on the side which require Fire and Ice to solve various waterfall puzzles. After reaching the top they see a giant geyser erupt and Ice and Fire use their powers to push the Geyser's water back, however Darkness has caught up to them and infects the Geyser turning it into a liquid giant. By evaporating it to reach its weak spots and freezing its arms to reach the higher up weak spots the giant is defeated and returns to water simply falling due to gravity. The duo seeing no path down the mountain decide to grab a rock and slide down.

Fire and Ice have a Toboggan run down the mountain being chased by the Darkness. Using Fire to melt Metallic Boulders and speed up the Toboggan while Ice can create ramps of regular boulders and destroy incoming Darkness the two eventually reach the bottom having outsped the Darkness for the time being. They continue into another cavern which takes them to a crystal cave where Ice encounters the first Crystal Ice which is needed to break a weakened stone wall. Continuing on and also encountering Water People who have been cursed by the Darkness the duo find the core of the cave where many lustrous gems shine all colours of the rainbow as the top of the room is open to the skies. The duo begin to look for their way up and find a path of gems which would work. However upon beginning their ascent Darkness falls on top of a Giant Diamond Spike in the middle of the floor, the Diamond turns into a huge Crystal Serpent which attempts to stop Fire and Ice's escape. While running up the platforms of Gems and also creating platforms from various waterfalls the duo reach the top where they find a Golden Flame which Fire uses with the Fire Spin to destroy the Crystal Snake before they escape into a forest.

The two travel into the forest finding both Stone people and Plant people alike who gradually become more and more corrupted by the Darkness. The duo continue into the forest and hear whispering from the trees speaking of the Light Dome and how it is the only protection from the Darkness. The duo continue on through the jungle encountering tribal encampments which require Fire to burn down the Wooden Gates and Ice to freeze and destroy the Glass barriers. After reaching a far distance from the tribal encampments they come upon an electrical factory, heading inside they find a heavily automated factory which is looked over by Electric People. The Plant People however break in part way through and begin to wreck the place as well as corrupt the Electric People. Reaching the main Energy Core, a large set of vines rises up from the ground clearly consumed by the darkness and latches onto the Energy Core becoming a hybrid between Machine and Plant. The beast attacks with electrified vines, plasma blasts and roots. By burning away the protective plant layer around the core with Fire, Ice is able to weaken the Core by freezing it temporarily causing the machine to gradually become more unstable to the point that it explodes.

The pair flee the Factory and arrive in a City of Neon. The City is already being attacked when they arrive and Electric and Plant people alike have been corrupted by the Darkness. Eventually they escape the city after travelling through both Skyscrapers and sewers, finding a mountain with the Light Dome at the top. The two travel up this mountain and stop about half-way up to see the Darkness consuming the City of Neon as the lights from the city begin to fade, they look further back and see the forest, lake, temple and desert also consumed by the darkness. They continue up the mountain encountering more Stone People who have been corrupted.

Fire takes the still heavily corrupted Ice to the Light Dome where the light partially fixes Ice however is incomplete. Fire seeing no other choice uses his own powers on Ice which despite normally melting Ice, are able to completely destroy the Darkness on Ice without hurting Ice. Fire collapses from exhaustion realising that almost all its power has been used up. Ice awakens and sees Fire lying down heavily breathing and gasping for air, Fire's flames becoming dimmer with each passing minute. Ice comes and sits by Fire's side and comforts Fire as the Fire across Fire's body begin to disappear with a final shot of smoke from Fire's eyes, Fire disappears. Ice weeps over Fire and the game ends, fading to black.

Outside of the main game there is a Vs, Mode for two-players. All locations featuring bosses can be played with the boss attacking the players throughout their battle. In the Light Dome both Fire & Ice can access their more powerful forms making this the first appearance of Stone Ice's form.

The Light People's Robot (Prior to corruption) - The Penultimate Boss 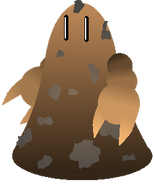 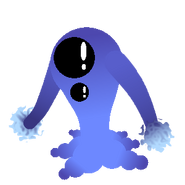 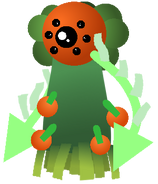 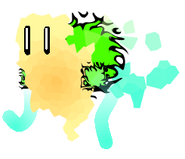 Lightning Being
Add a photo to this gallery
Retrieved from "https://fantendo.fandom.com/wiki/Fire_%26_Ice?oldid=3202248"
Community content is available under CC-BY-SA unless otherwise noted.