Fiora (Japanese: フィオルン Fiorung) is a character from Xenoblade Chronicles. One of the main protagonists of Xenoblade Chronicles, Fiora is a Homs who grew up alongside Shulk and Reyn in Colony-9 with her older brother Dunban. Fiora is a talented cook and often cooks for Shulk, yet believes he is ungrateful for her assistance and claims he may lack a sense of taste because of this.

Fiora, alongside Shulk, also appears as a Blade in Xenoblade Chronicles 2, available through the game's Challenge Battle Mode available as downloadable content.

Fiora appears as an unlockable playable character in Super Smash Bros.: Going for Gold. In this game, Fiora is one of the ten characters capable of transforming into another via either a special move or her Final Smash, a "Switchable Character". In Fiora's case, she is capable of switching into her Faced Mechon, Face Nemesis. Her moveset, and how she transforms into Face Nemesis, are unknown.

Fiora appears as a Pair Unit teaming up with KOS-MOS from Xenosaga once more.

Fiora is one of the default characters in the game.

Fiora appears as an Unlockable character. 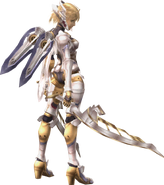 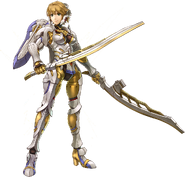