Finian Finnigan Felicis, or simply Finian, is an amnesiac "Wisp", a ghost-like humanoid creature of short height, who debuted in Welcome! to Heck. In the story, Finian wakes up after supposedly dying in a hell-like dimension called Heck, with no memory of who he is, how he died, and why he's in Heck. The story follows the innocent Finian as he tries to uncover the real reason he's trapped in the hellish realm.

Finian's ghostly form resembles a small humanoid figure of dark navy coloring, with bright blue eyes and dark shoe-shaped feet. He wears a golden floppy sorcerer's hat, and a turquoise cloak, both with notable patches and stitches on it. Under the hat is a small tuft of black hair, possibly a reference to his appearance in his past life.

Finian, despite stuck in the satirical parallel to Hell, is surprisingly optimistic about his situation, and is a relatively large beacon of light to the less hopeful residents of Heck. In comparison to the nihilistic or angry Wisps in the realm, he's innocent, affections, and a real joker. He's sensitive and doesn't think much before speaking, but he's a good friend.

Finian's stated by his creator that he's asexual and aromantic, but still seemingly shares moments of attraction and affection towards other characters: this is because his level of youthfulness and innocence has him believe that there's no difference betwewn a romantic partner and a good friend, hence why he often treats friends as such.

Finian wields a special type of magic known as Wisp Magic, which, at first-sight, is basically spooky fire magic. However, it's actually much more complex than it sounds, as the small fires can inflict all sorts of mayhem on his adversary. This includes burn damage, electricity damage, psychokinetic damage, paralysis, a sleep curse, and so on. He can also shoot himself at great speeds using the wisps, if he places them at his feet. 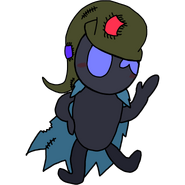 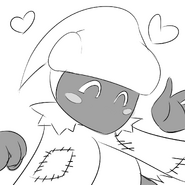 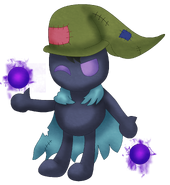 Retrieved from "https://fantendo.fandom.com/wiki/Finian_Felicis?oldid=3236918"
Community content is available under CC-BY-SA unless otherwise noted.