The story starts off with the final round of the tournament: Mario vs Sonic. After fighting each other, Mario/Sonic releases his opponent. Mario/Sonic awaits his prize of a trophy/chili dog.

After the fight, a sudden interruption from the monitors in the stadium blasts a message from Ultron, who declares war on all life. Armored Primids in Iron Man like armor drop down from the skies, along with the normal Primids. A subspace bomb is set up from a Virtual Boy. While Sonic attempts to take out the bomb, it's just proving itself to be an useless endeavor.

Nick Fury, who reveals himself to be a Life Model Decoy which Ultron has taken control over attacks Mario, while Sonic escapes with Mirania. Mario defeats the fake Nick Fury, but discovers that the decoy has a subspace bomb inside of it as well. Suddenly, a rocket shoots it, causing a normal-sized explosion which knocks Mario out of the stadium.

Meanwhile... Homer Simpson is enjoying a doughnut when all the sudden the Kermit Mafia attacks! After defeating the Kermit Mafia, Homer goes out of the coffee shop only to meet Mordecai and Rigby. They point to the subspace bomb being planted in the town, and Homer and his new found friends try to rip the Virtual Boys off the machines. After seeing they can't, they run. The bomb sucks up the town, and they barely get out alive.

Finn and Jake are saving the Candy Kingdom from a deer attack when he sees a large and flying ship named the Solar Sailer. The Solar Sailer drops a subspace bomb and Primids. Finn and Jake attack the Primids. Princess Bubblegum is abducted into the ship, and Finn gets grabbed by Jake, who pulls him out of the bomb's range.

Mario finds himself in Asgard, where he meets Thor. Thor fights him, believing him to be responsible for the subspace bombs being set up. After defeating Thor and turning him into a trophy, Mario taps the base and Thor joins Mario's side as they take down the Subspace intruders. Loki reveals himself to be behind the attack on Asgard, stating that if he cannot obtain the throne then he will destroy it. After defeating Loki, the trophy is taken by Nabbit who heads to the portal room to go to Midgard. Thor and Mario follow him.

Mario and Thor land in Midgard, specifically on a strange island where they meet back up with Sonic and Mirania who landed here after jumping out the Stadium. Suddenly, Syndrome's henchmen come in and attack. While the group is able defeat a few, one nearly kills them but is stopped by Mr. Incredible. The group heads into the jungle to find Syndrome's hideout. 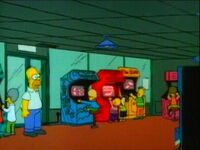 Meanwhile, Homer, Mordecai, and Rigby stop at arcade where they are approached by CLU's henchmen. Almost unable to take them, they are saved by Quorra who tells that virtual world is coming into the outside world through a strange source that she cannot recognize. They hijack the Solar Sailer but are turned into trophies by Rinzler.

Rinzler takes the Solar Sailer and sails off to his superior, CLU.

Samus Aran, in the meantime is in a research lab for TWO, which to her discovery has been taken over by the Primids. After defeating some, she heads off to find R.O.B fighting the Primids as well. Then, The Lizard shows up out of nowhere in the old lab, and attacks them after strangling a researcher from Oscorp. After defeating The Lizard they head towards the hallway.

Portal to Another Time