THIS ARTICLE IS NOT SUITED FOR PEOPLE UNDER 13, EVEN THOUGH YOU HAVE TO BE 13 TO SIGN UP FOR WIKIA ANYWAY 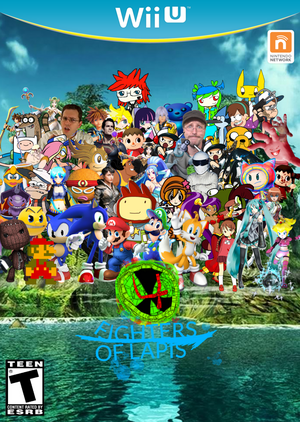 Fighters of Lapis 4/వరల్డ్స్ కలయిక is the fourth installment in the Fighters of Lapis series. This one will be combining elements from all of the Lapis games. The roster started from scratch again and there will about more or less the same amount of characters there was in Fighters of Lapis 3. Tabuu is not the main villian, a character named the Fusionist is.

Similar to the first and second game, there are lots of things to do.

In Brawl, 8 characters can be on the field at a time. However, it is highly recommended you play with just 4. Items can be turned off, but that's only if your a sissy. Each and every character has a super move which they can charge through fighting. Items can now be equipped to characters, whether it be a weapon or a healing item.

Reactor of Darkness focuses on the final days of the Lapisverse. It is a little long.

Tournament is just where if you have a party of people you can switch in and out.

Multi-Man Melee is where you fight evil versions of characters that you've unlocked.

Adventure Mode is a mode that has you pick a character to go through many different stages up against other characters, who each have random effects and dialog towards certian characters. At the end, you face off Landshark or Greg.

Classic pits you off on random fighters much like Adventure, but with no minigames. You fight Master and Crazy hand at the end.

Boss Rush lets you pick three characters to play as to be fight off the bosses from story mode. They are done in a random order (for the exception of ???) and is unlocked after beating story mode.

City Trial is a large stage where a group of characters can free roam the said large stage and meet/unlock other characters. After a certain amount of time is spent exploring the city, 3–7 minutes depending on the options set beforehand (default is 5 minutes), a match begins, where the players can put their new characters up against the other players in one of several different challenges.

Championship Cups is a collection of fighting matches against other characters and features a boss at the end. The victor gets the cup and a new character. There will probably be around 30 cups.

L-Mode is a dating simulator, using models from the game. It features it's own overworld and aside from dating, has shops which you can purchase Synthesis items.

Synthesis can be used to fuse items together to get better items. Ingredients can be found randomly, bought, found in a chest in "Reactor of Darkness" or obtained through doing certain things.

Gallery showcases all your trophies as well as other achivements. It's also where items are stored.

King Candy's Fungeon, a unlockable mode that puts you in a dungeon with several floors. Each floor has different fighters and once you K.O them, they join you. Several new characters can be unlocked as well.

There is also a mode to input codes. Codes are listed in the article.

The theme for this game is Alex Clare - Too Close. This plays during the opening.

The screen is black, gradually turning white and then focuses on Destiny Islands. Sora is relaxing on the beach when suddenly a fireball from Mario goes past him. Sora draws the keyblade, but is attacked by Mai Shiranui. Just then, Riku's Keyblade is thrown at her, knocking her down. Riku comes into view and Sora and him fight Mario and Mai back to back. Sonic whizzes in, taking the four out, but is knocked down by a green fireball by Luigi.

Luigi is then lifted up by Tails who then drops him by Villager who is currently cutting down all the palm trees. A pirate ship with Risky Boots and Bonne Jenet comes by, with Shantae attacking the two. Suddenly a grappling hook hits a palm tree, and Dipper and Mabel come down and attack Villager and Luigi.

Turning back onto the action of Mario and Sora fighting, Kirby suddenly sucks in Mario and copies his fire abilities. A soccer ball whizzes by Kirby, the soccer ball coming from Peach. Deadpool comes from the bottom of the screen and attacks Kirby.

Peira and Sheyna are relaxing on the beach when suddenly a volleyball from Panty and Stocking hits them. Peira and Sheyna attack them in retaliation. Suddenly Zak attacks the four by spinning his strechy arms, knocking them onto opposite sides of the beach. Peira is slammed into Shantae on the boat and Panty and Stocking end up landing near Deadpool.

Suddenly in the middle of the island a red hand springs out from the ground, revealing the Fusionist. Everyone attacks him, joined by the other starting characters.

The intro then ends.

The Lapis universe has been brought back... but how? Mario and the others try to find out while dealing with a character named the Fusionist that is fusing several things together and their own dark sides.

While fatalities orginate from Mortal Kombat, they work slightly different here. These fatalities don't have blood, and they can only be pulled when it's the end of the stock of a character and they have to have 300% or higher health. They will appear dizzy, and then the player must get near them and push the attack button. This will automatically KO them. Each character has their own fatality that can be enflicted on them, but some characters like "Villager", Toon Sub-Zero, and Toon Sonya have their very own fatalities that they can use on any character.

In order to fight in these cups, all the characters participating in it will have to have been unlocked before hand.

Music returns to the game, and more albums can be unlocked.