Fighter Flies are insects that debuted in the sewers of Brooklyn in Mario Bros. as enemies. In most platforming games they appear in, they take short hops, stop, and take another hop, sometimes chasing the plumber. Usually they cannot be stomped. They also have multiple appearances, such as one with a peach colored head and Lakitu-esque glasses and one with a huge scowl and Goomba-like eyes.

Fighter Flies reappear in Lets-a-go, Mario, mainly in the Spelunk Area and the Nostalgic Area. They attack like they did in most games before, by hopping and taking short pauses. Unlike in most games, they can be stomped, which will flip them and gives the player the ability to carry them, like a Goombon. 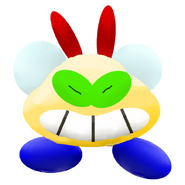