Fi is a character first appearing in the 2011 Wii game The Legend of Zelda: Skyward Sword. She is the humanoid representation of the Goddess Sword, she is the spirit within the sword and serves as Link's companion on his adventure.

Similar to Midna, Fi speaks in a synthesized, gibberish language. Her style of speech is also emotionless and robotic. Fi has a tendency to dance and skate around when relaying a message from the gods. Fi also has a tendency to predict percentages when analyzing things and determining probability. Fi refers to Link as her master, having recognized him as the chosen hero.

Fi appears in Super Smash Bros. Clashed as a default assist, when summoned she will scan opponents and then temporarily allow the user to use the B standard ability of the opponent who was scanned. She also appears as a collectable trophy, obtained by using her as an assist for the first time.

Fi is a playable character in Hyrule Heroes. She attacks simalarly to how she attacks in Hyrule Warriors. She has good power and speed, and is pretty rounded. She is a little slower than Link though.

A full gallery of all artwork of Fi. 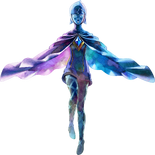 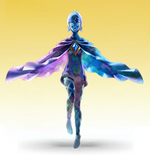