Fantendo - Game Ideas & More
Register
Don't have an account?
Sign In
Advertisement
in: Free to use Characters, Articles under Construction, What is the New Fantendoverse?,
and 14 more

Fera is a character created by Pyro Enterprises, acting as their primary mascot character and the main protagonist of the Heroforce series. She also acts as the company's main representative in the New Fantendoverse, being the most intertwined with the events cataloged in said universe.

Fera has many personality traits that can be considered apt for one who is considered a model soldier; she's dutiful, loyal, friendly, and highly determined to accomplish whatever she sets her mind to. Under most circumstances, she can be rather submissive, accepting most orders and requests without question, though some instances have lead to her being more defensive and stubborn about following orders. In truth, she has a tendency to be extremely stubborn towards beliefs she holds, rarely changing her mind once she has it set on something. This can lead to her occasionally becoming more aggressive or standoffish in these instances.

Fera is an extremely outgoing and social person, and enjoys the company of other people very much. These traits tie back into her former role as a general and military leader, as well as her more expressive personality when nearby others than when alone. She's an extreme optimist in most cases, always aiming for the option that helps the most people rather than the most effective method.

As stated in her AMA and supported in scenes found in various pieces of media, Fera is a hopeless romantic, having acted as a matchmaker for her friends Teryx and Kobal in Heart of Iron and having stated to enjoy reading "trashy" romance novels in her AMA. As showcased with her relationship with Aurora, she is just as affectionate with her own romantic affairs, remaining loyal and passionate over long periods of time. In spite of that, Fera has a fear of having children, primarily due to events in her own life, and has no desire to have a child of her own for the time being.

Tying into her extreme social outlook and connective personality, Fera is also noted to have a fear of losing her friends by means of death or harm. This may be why she acts as a protective figure so often; an attempt to protect those she cares about from harm.

As showcased in Heart of Iron, Fera is in essence an amnesiac, with much of her memory being restrained and stored by Nyxiel's memory inhibitor lodged in her spinal cord. However, due to the retconning and memory-shifting effect of the Shattering, Fera essentially possesses a full timeline of memories to match the Fantendoverse, with her original memories stored in the inhibitor.

Fera is a tall woman with tan skin and brown hair, belying her Latina descent from Old Earth. Her hair is usually cut short due to her role in the military, though she has been known to grow it out in the New Fantendoverse when times are more relaxed.

Fera's clothes are stated to be made of a liquid metal that conforms to various appearances depending on her whims and wishes, and they usually shift between a tank top-shorts combo and a t-shirt-skirt combo. In combat, she is often seen wearing heavy armor for self-defense, taking on the form of standard Terran armor during Heroforce's story and the mysterious Xenosuit in Fantendoverse content.

Fera's abilities consist mainly of her own military training; she has above-average physical strength and athletic abilities as well as exceptional skill with a spear and shield, her signature weapons. While she is skilled with many melee weapons, it appears as though she is unskilled with many varieties of ranged weapons, and uses energy-generating apparatuses in her spears to circumvent this.

Other minor superhuman attributes Fera possesses can be traces back to her evolved Terran body, such as enhanced muscle structure giving her bursts of enhanced strength and speed, higher bone density, and superior night vision to that of a normal human. The latter, however, does render her more vulnerable to flashes of bright light, causing her to get migraines somewhat often when exposed to flashing lights.

Within the Pyroverse, Fera is noted to be the most powerful and volatile user of Drive in recorded history due to a combination of her genetics, upbringing, training, and personality. Currently, the only seen use of her Drive power is by attaining a state known as Ultimate Form, which seems to incredibly enhance her strength, durability, and reflexes. Though she drops her standard weaponry in Ultimate Form, Fera also gains the ability to summon a near-infinite amount of naginata-like blades, which she gains a form of telekinetic manipulation over. Ultimate Fera is also able to perform a technique known as Aegis Blockade, which summons a large barrier of pure force to block attacks in place of her shield. Aegis Blockade is impenetrable by any attack, but only lasts for a few seconds, so it loses effectiveness against continuous or consistent attacks.

As Ultimate Form relies on Fera's Drive, she is only able to achieve it when sufficiently pushed to her breaking point or motivated in other ways; if she does not have a will to fight, she cannot call upon it. It is also entirely unavailable to her in the New Fantendoverse, due to both the loss of memory on how to call upon it and the complete absence of Drive within the universe.

Fera's origin, this game casts Fera as the mascot character and one of the 64 main playable heroes. True to her nature of a defender and leader, this game casts her in the role of a "beacon" character, meant to lead team charges into enemy territory and striking en masse.

Fera is first shown as a Terran military officer, encountering the arrival of Coronite and being the first Terran to have close contact with Lucius. Shortly thereafter, she is forced by her commanding officer to attempt to conquer Coronite, despite her qualms about the process, and begins the Hero-oriented war between planets.

Eventually, she learns more about the previous civilization that once dwelled on the planet's surface- Lucius being the final remaining organism of the Coronid species- as well as the existence of the true Coronite: a god-like destroyer trapped within the planet's core. Though she successfully manages to defeat the beast for good by allying with some of the remaining Heroes, she is confronted by Lucius shortly thereafter. The Coronid attempts a proposal, and Fera refuses, leading to a violent assault that leaves Fera critically injured and Lucius's whereabouts unknown- it is believed that the Coronid gained access to a sample of Fera's blood during this skirmish.

Fera was taken to Lillius by Raune and allowed to recover, where she remained until entering the Fantendoverse during the events of Fantendo Smash Bros. Shattered.

Though Fera doesn't physically appear in Super Smash Bros. Crash, her amiibo is compatible with the game. By scanning it, a costume based on Fera will be unlocked for King Boo to use; he wears her helmet and wears her shield.

Though Fera is not physically present in Stampede Breakfast 2, one of King Boo's alts has her wear a costume based on her. It is identical to the one he wears in Super Smash Bros. Crash.

Fera's debut Fantendoverse appearance, she acts as a playable character. She is not overly crucial to the events that occur during the story, merely entering the conflict when she is picked up by Slaughterbus. According to creator Pyrostar (t∣b∣c), her home universe of the Pyroverse is non-canon to the events of the New Fantendoverse, and only temporarily crossed over due to the Shattering occuring; this allowed Fera to transfer universes.

Fera has remained in the New Fantendoverse since this game, and has seemingly had some of her memories retconned or erased by The Fan and The Enemy, alongside many other characters, when the universe was remade.

Fera is a playable character in Sports Resort, acting as a strength-type character with medium stamina and low speed. Her signature skill in this game is Volley, which enables her to exude massive amounts of force on a nearby ball, or in games during which a ball is not in play, boost forward with exceptional levels of speed. This is so far the only game in which she demonstrates this ability.

Fera's Doppelganger is Widi, who seems to have retained many of her memories of the Pyroverse and the events of Heroforce unlike the true Fera, leading to a lack of knowledge about her clone.

Sports Resort is also the beginning of Fera's relationship with Aurora, with the two sharing multiple Hot Tub conversations together as well as being seen in the dance together near the story mode's ending.

Fera is once again a playable character, sharing similarities in her moveset to that of the previous FSB game. Instead of her Terran armor, she is depicted wearing the Xenosuit instead.

Fera does not play much of an active role within the main story, but plays a prominent role in Aurora's interlude, in which she is captured by The Threat's forces for a currently unknown reason.

Fera makes a playable appearance in this game, though not much information is provided on her at the current time. 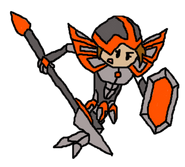 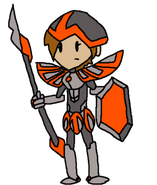 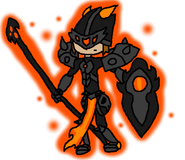 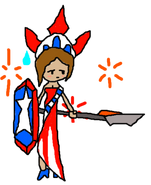 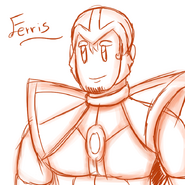 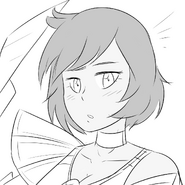 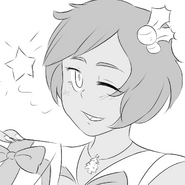 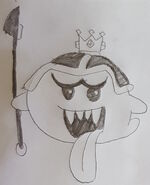 Halloween-themed art with Fera in a King Boo costume. 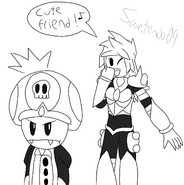