Fantendo - Game Ideas & More
Register
Don't have an account?
Sign In
Advertisement
in: Free to use Characters, What is the New Fantendoverse?, Villains,
and 9 more

Fenrir of the Flame

Fenrir is a Sparkling who is a business man, profiting from and funding The Doomuli. The character was created by Helena Harper (t∣b∣c) as a way to boost up The Doomuli's influence in the Fantendoverse even when they are not directly involved. Fenrir is one of the bigger people invested in The Doomuli, seeing profits from them as they spread their influence across the galaxy as well as funding them directly. Fenrir also assists the Doomuli in tracking down rebellions against them, such as his mortal enemy Kiva Glaive's resistance group.

Fenrir of the Flame is a black colored Sparkling who invests in The Doomuli, although he has his own retaining army of Krexxon, who he encountered across his journeys through the universe. His finical power can make it seem like he is far more powerful than the Doomuli themselves, who seem to bow to his whims to keep him funding the organization. Over the course of his story arc, Fenrir becomes more and more afraid of what he is not, what money won't buy and begins to lash out.

Fenrir is a black Sparkling with yellow glowing eyes and a glowing yellow mouth. Around his right eye is a ghostly flame. His head shape splits off into two ends, giving his head giant wolf-like ears like his Norse namesake. His body shape is mostly curved, with a spike tail that resembled a bee. He wears a elegant neckpiece with his company's symbol on the two hanging scarves.

Fenrir is a cruel person who doesn't care about suffering so long as it isn't him, mostly caring about his profits, although he admits it stopped being about money a lot time ago. Fenrir mostly revels in his success and makes sure people pay less attention to his losses, usually stumbling into the same mistakes as a result. While not a exceptionally powerful character on his own, he has the money to pay for whatever he feels will protect him best, enlisting the help of the Krexxon to do his deeds.

Notably, Fenrir likes to gloat about his cash and often is seen goofing off during fights by going to online stores to purchase weapons to help him against whatever foes he's up against. Fenrir dislikes dark rooms as he can't see very well in them, and seems to have a phobia of the darkness. Fenrir likes to use his pyrokensis to cover every room in complete light, often to blinding levels. Fenrir seems to believe in a being known as Moonwhite, who can only seemingly be seen by him and young children, who taunts him in pitch darkness.

Fenrir also wants to be seen as fearsome and feared, and hates it when people call him cute. He has tried voice modulation, getting very large holograms of himself to appear massive when he's not around, and even wearing a scary mask, although none of these have worked well for him.

A alternate version of Fenrir of the Flame known as Alpha Prime Fenrir appears here, with much of the same personality traits as his original character, rendered in the simplistic Alpha Prime Sparkling style based off the original Volt designs. He is a two star character.

Fenrir has a brief appearance in the post-credits scene of the movie, giving orders to two hooded, kneeling individuals. According to him, he has some plan involving the impending invasion of Jalgor.

Fenrir plays a much bigger role in this movie, offering the Vanguard of Spirits a deal of sorts, promising to aid their forces in exchange for data crystals that belonged to Jalgor's original inhabitants. This was supposedly to break down the magical energy wall that coated around the star system so that the Doomuli and other forces could begin invading it.

Fenrir is main antagonist of Just Like Old Friends, appearing as Kiva Glaive's mortal enemy. Much of the plot involves Kiva and her group heading to face off Fenrir again, while Fenrir himself gets into a spat with the Doomuli when he realizes Kiva survived the original attack at the start of the story. Fenrir comes off almost as more powerful than the Doomuli in his appearance, with his financial influence appearing to give the Doomuli pause and ask for forgiveness for disappointing him. However... the story is not over yet.

Fenrir has a small cameo at the end of the second episode of Ghostverse Stories, Weakness. In said episode, he speaks with his henchman Doomulus Xyne regarding future plans in the aftermath of Jalgor's destruction and the opening-up of the Ghostverse.

Fenrir has yet another cameo at the end of Beyond Spirituis, talking with Doomulus Xyne regarding the supersoldier project he's conducting. Fenrir offers to provide a suitable candidate as a "guinea pig" of sorts for the project.

Fenrir is a Sparkling capable of creating flames, and being somewhat skilled in this ability to boot, often shooting off flames from his hands. He is also seen to be skilled with a blade, fighting with a floaty fencing style and making great use of his deattached hands during combat. That being said, Fenrir prefers others to do his fighting, and often enlists the help of a Doomuli Member or a troop of Krexxons to do his dirty work.

Fenrir has a deep hatred towards Kiva Glaive, wanting to crush her and her resistance for being able to escape his grasp so many times. This is a main reason why he originally wanted to part ways with the Doomuli, as they had failed to kill her in the past. While Fenrir has a lot of power, he is deeply afraid of Kiva due to her hailing from Zeon, which seems to have only spawned amazing warriors from it's ruins.

Fenrir sees Doomulus Xyne as a "son" of sorts, as he helped make him into the Doomuli commander he is today and taught him numerous skills. He believes that Xyne is his eyes and ears within the Doomuli, and often gives him inside info to assist with his endeavors. However, he does worry that Xyne may hold more loyalty towards the Doomuli than he does towards his former master. 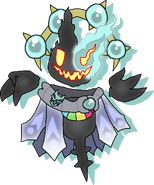 Fenrir as seen in Trip to uHive