As a werewolf Fenrir is known to be quite the heavy hitter. He is a fast character with wild attacks. Most of his attacks include charging or lunging at the opponents, grabbing a hold of them. He is really a close combat character, but can come close from a long distance. He can make quick combo's and his finishers push opponents back. His main form of attacking are his claws and teeth, but occasionally also uses his feet.

His Doom Attack is Bloodmoon Rage. When executed the moon above starts to be colored red like blood and Fenrir's eyes do the same. He seems to be much more wild and goes completely berserk. He lunges at the opponent and throws them in the air. As sillhouettes in front of the moon Fenrir deals multiple slashes at the opponent before dealing a finishing blow to the ground. If KO's Fenrir slashes through their body with the finishing blow.

Fenrir was born to two humans during the night of the full moon, causing him to be born as a werewolf. Every night he would transform into a wolf, but would also silently continue his sleep. It was when he his puberty that he lost control over himself at night and started creating havoc in the village he lived in. The people of the village, including his parents, contracted a coven of witches to stop it. The coven did this by turning him into a wolf for eternity, so he also wouldn't go berserk at night. One of the witches of this coven, Claudia, disagreed with it and decided to take Fenrir away and search for a way to cure him, leading them to Giselle's coven in Wildefort.

When Fenrir first arrived in Giselle's coven, he was neglected by everyone. Claudia was asked to join the coven, while they would "take care" of Fenrir. Instead he was locked up in a cage, and Claudia couldn't open it as a magical alarm would go off. Fenrir however was freed by Claudia when Gaz asked for Fenrir's help. Claudia would stop the witches as the two escaped. Fenrir helped Gaz in his quest to stop the vampires in the city. They arrive at Hendrick's Manor and Fenrir battles Count Hendrick. A heated battle goes down, but Fenrir wins it, that is until he is trapped in a binding spell by Scarlet, who was sent to retrieve Fenrir from Giselle. At the coven, Fenrir was to be killed due to Claudia's betrayal. Claudia however saved him and they fought Scarlet and Shaniqua together. They win, but Claudia is on the verge of death, her spirit animals even turning on her. Fenrir rushes into town looking for someone who could help her and follows an echo that leads him to Hanakatoba, who says she will gladly help a friend of the spirits. As she heals Claudia, an evil reflection of Claudia and Fenrir appear. Fenrir battles !Claudia and Hanakatoba battles !Fenrir. Afterwards Hanakatoba fully heals Claudia and thank her. They however say that their quest is not over yet, and that they will find a cure, but that for now, it's best to lay low.

Fenrir is invited to the Hanging Gardens of Babylon to participate in the games. 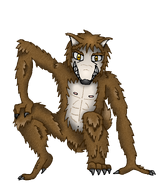 as he appears in Warriors of Babylon

Profile
Add a photo to this gallery
Retrieved from "https://fantendo.fandom.com/wiki/Fenrir?oldid=2563327"
Community content is available under CC-BY-SA unless otherwise noted.