Felton is one of the two main protagonists of Birds of a Feather, alongside his childhood friend Trent.

Felton loves to crack jokes. He's seen as the "smartass" of the duo, whereas Trent is the "straight man" of the two. Sometimes his jokes get out of hand, but he likes to have a positive attitude.

Yet, Felton can find himself worrying at times, especially when visiting new places. He's not used to being outside of his comfort zone.

Felton, alongside Trent, is one of the game's two protagonists.

Felton and Trent both snuck onto ships belonging to the Circle of Shadows, but were promptly captured and tossed onto a prison ship. 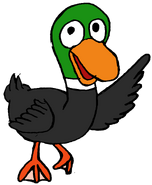 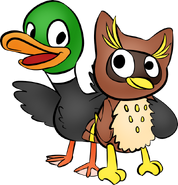 Group art with Trent, by User:AgentMuffin.

Sprite by User:TheLonelyHydreigon456
Add a photo to this gallery

Retrieved from "https://fantendo.fandom.com/wiki/Felton?oldid=2631118"
Community content is available under CC-BY-SA unless otherwise noted.