Fantendo - Game Ideas & More
Register
Don't have an account?
Sign In
Advertisement
in: Free to use Characters, Hoola's Stuff, Characters,
and 7 more

Felicity Sayser is a resident of the city of Obsidia and is the main protagonist of the game Stone Quest, a RPG adventure game. She is a young girl of 15 years who has a younger brother, Spencer. She enjoys solitude and music, but she still loves hanging out with her best friend, Cordera. Like most of the people in her city, she has the ability to control rocks, and she commonly uses the rock amethyst like her best friend.

She is normally sized height-wise for a 15 year-old girl. She is more of a tee shirt and stretch pants person, who doesn't focus much on fashion, and she focuses more on battling with rocks. Like many iconic video game characters, she is always wearing the same clothes, other than at the story where she becomes queen. After that, she wears royal attire that changes from time to time.

When she is still a girl before and on her adventure, she wears a ponytail along with her sparkly purple glasses. Her tee shirt is stripped blue and yellow, and she wears black stretch pants. She wears green sneakers with long socks that continue half way up her leg.

When she is queen of Obsidia, she sits on her throne with a long flowing dress, which she doesn't especially appreciate, but she rolls with it. Her hair is curled up in three separate intervals, making a great bow on the back of her head. This fashion style also became popular for all that followed in her line of kings and queens of Obsidia.

Even though she seems kind of bratty in the introduction of her game, Felicity is one of the nicest girls in Obsidia, but also one of the most powerful. Her and her brother, Spencer, have a normal sibling rivalry and she is always hanging out with Cordera after school. She loves solitude though and hates loud events and having to obey her parents.

She always completes things to the fullest, but she does tend to wear casual clothes. With Cordera, they always play card games and play scrabble on their phones. In her game, Felicity is quite curious of different places she has never been to before.

Felicity, like most other people in her city, harnesses the power of rocks for entertainment and sometimes emergency combat. She uses the very popular amethyst, but she somehow manages to create amazing attacks from it. She fondly nicknamed her amethyst Payton. Through he rock, Felicity can shoot amazing lasers and is also amazing at defending herself physically. She becomes very intense when engaged in combat.

When controlling Payton, she can shoot lasers out of the center of the rock, a very simple attack. But her lasers are much more powerful and larger than normal, signifying that she had some training with rocks at a young age. Payton can also shoot a ball of energy called an "engiy". A strange cloud that shoots lightning over opponents when Payton is attacking. But this lightning never hits opponents, it is simply there for the purpose of frightening opponents. The other projectile she can shoot with Payton is "primie", which is a horde of weak arrows that rain upon the opponent. At the end of her game, she harnessed the opal gem, which gave her the power to control all rocks and allowing her to shoot "sibles", which are basically rock ninja stars.

When she is queen, she is obviously much more powerful, but she still retains her friendly personality and still is friends with Cordera. With the remaining power of the opal gem, she can shoot two other powerful projectiles. These include "cliepen", which are mini lasers that come out the four corners of the gem, and "usefle", which are basically a horde of little dogs that come rampaging forward, biting opponents.

The Legend of the Three Ladies

In Average Super Smash Bros. she is a legendary neutral primary spirit who grants Shooting Attacks ↑↑.

Felicity is Spencer's older sister. They tend to have a friendly sibling rivalry, but they always stop their disagreements when they are in peril. She is no longer in contact with him after book 3 and most of the sequels.

Felicity is Cordera's best friend. They have been best friends since kindergarten, and they still share interests. They hang out all the time after school. She never loses her relationship with her though.

Rylee, Jackson, Nina, and Hailey are all good friend's of Felicity's when she first leaves on her incredible quest. But only Rylee and Jackson stay loyal to her and retain their friendship with her. 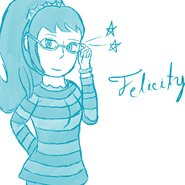 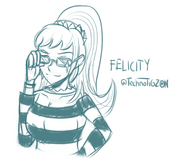 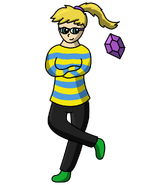