Fearsome Red's Fantastic Follies is a Nintendo Wii RPG by Vined Inc. that is due out late 2009 in Japan and America and early 2010 in Australia and Europe. It focuses around Yoyo, the Red Yoshi Kid and member of the Fearsome 5 from Paper Mario. It is the second game in the Paper Partners Series.

Yoob, the village leader announces that he is ready to pick his heir for when he retires and he will choose out of the five Yoshi Kids. The five children are all excited and think of ways to proove themselves, however it's Yoyo the Red Yoshi kid who's idea stands out the most. Repair connections with the Yoshi Tribe of Yoshi's Island in Dinosaur Land.

Yoyo goes to leave when Sushie tags along, he won't let him just disappear without a trace and so they go to Dinosaur Land to try and find the Yoshi Island. Along they way they find out the Yoshi Tribe is in great danger thanks to the neighbouring Rex tribe.

Yoyo's new mission is to not only reunite the tribes but to save the other tribe as well so he sets out across Dinosaur Land with a variety of new partners including a vacationing Pianta and a terrified Hothead.

When he saves the Yoshis, he succsfully repairs relations between the two tribes and they promise to swap mail through the Paratroopa mail service all the time and to have yearly visits. Yoyo is chosen by Yoob as his heir. 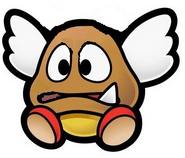 Jr. Troopa
Add a photo to this gallery
Retrieved from "https://fantendo.fandom.com/wiki/Fearsome_Red%27s_Fantastic_Follies?oldid=2940587"
Community content is available under CC-BY-SA unless otherwise noted.