“I HAVE FURY!”
— Fawful's catchphrase

Fawful is a major Mario & Luigi character, first appearing in ''Mario and Luigi: Superstar Saga''. He was Cackletta's rather insane assistant, known for speaking grammatically incorrect English (Engrish), making obscure food metaphors in his sentences, and his infamous "I HAVE FURY!" catchphrase. Fawful is a mechanical genius, but his common sense suffers due to his uncontrollable anger, which often causes him to act in a delusional manner. His name comes from the words "guffaw" (a term that refers to powerful laughter) and "awful".

After his defeat at the end of the game, he would later appear as a shopkeeper in Mario & Luigi: Partners in Time and the main antagonist of Mario & Luigi: Bowser's Inside Story. In the latter game, he is finally defeated and, in the last ditch effort to destroy his adversaries, explodes inside of Bowser, though this causes Bowser to spew out everyone from his body.

Fawful debuts in Mario and Luigi: Superstar Saga as the secondary antagonist and penultimate boss. Aiding her in her plans to awakening the Beanstar, he steals Princess Peach's voice in the beginning of the game, and fights Mario and Luigi on top of the Koopa Cruiser when they first encounter him and Cackletta and after knocking Bowser aside. This results in his Vacuum Helmet to be destroyed, though he summons another one and heavily damages the Koopa Cruiser, causing it to explode and launching Mario and Luigi into Stardust Fields. He is later seen again in Hoohoo Mountain, blocking their path with a giant stone, and in Beanbean Castle, stealing the Beanstar alongside Cackletta and force-feeding the kingdom's ruler, Queen Bean, a Belly Blech worm to aid in their escape.

Later on, he is seen in Woohoo Hooniversity, where he and Cackletta try to awaken the Beanstar using Peachbots, though their voices drive the Beanstar mad (it is later revealed that it was Birdo

s voice they stole), and is quickly dunked into the ground by Luigi. After Cackletta is defeated, he saves her life by sucking up her soul into her headgear, and prepares to finish off the bros, though Prince Peasley sends him flying out of the university's roof. He then finds an unconscious Bowser, whose body Cackletta possesses, creating Bowletta. After kidnapping Princess Peach in Little Fungitown, Bowletta forces the bros to gather all pieces of the Beanstar and tells them to go to Joke's End once it is restored. Though they try to fool them with a fake Beanstar, Fawful acknowledges this and takes the real one, foiling their plan. In a last resort, Luigi dresses up as Princess Peach, causing Bowletta to drop the real one and kidnap Luigi, who then recovers the Beanstar after they realize they were tricked once again. Fawful and Bowletta go back to the Mushroom Kingdom to take control of Bowser's Castle, attacking Beanbean Castle and its town. Once Mario and Luigi reach the flying castle and defeat the Koopalings, he himself would go on to fight the brothers, only to be defeated and kicked out of Bowser's Castle by Luigi.

He is next seen running Fawful's Bean n' Badge in the sequel, Mario & Luigi: Partners in Time, down in the sewers of Peach's Castle, selling Badges for beans and being the game's Bean-based shopkeeper. He apparently does not recognize Baby Mario and Baby Luigi were the adult brother's baby selves. The infants can hear his story of his past encounter with the adult Mario Bros. in the previous game. During this story, he notably mentions that he plans to return in the future (creating a period of time in which "no baby's candy will have safety"), foreshadowing his major role as the main antagonist in the next Mario & Luigi game. After hearing his story, they can sell their beans for powerful Badges, and also suggests that the babies go to Princess Peach's Castle's viewing platform prior to the time they discover Gritzy Desert, giving them a hint. They can also ask Fawful where to find, how to obtain, and explaining the purpose of Beans in the game.

Fawful later appeared in Mario & Luigi: Bowser's Inside Story as the main antagonist. He was the one responsible for beginning the outbreak of the "Blorbs" in the Mushroom Kingdom via Blorb Mushrooms, and was the one who sold the Vacuum Mushroom to Bowser in the beginning of the game, advertising it as a "Lucky(?) Shroom", as the means to inhale Mario, Luigi, Princess Peach, Starlow, and other Mushroom Kingdom citizens so he take over the Mushroom Kingdom and capture Bowser's Castle. He steals the Dark Star from Toad Town Tunnels, absorbing its energy to turn into Dark Fawful. Bowser battles him in the conference hall (where he first fought Mario at the beginning of the game) and beats him, causing him to transform into the Dark Fawful Bug and flee, though he is later inhaled by Dark Bowser, causing him to fuse with the Dark Star and completing Dark Bowser's form. During the final showdown, Bowser inhales Fawful, causing him to fight Mario and Luigi inside his body, transforming into the Dark Star Core, though it is destroyed, weakening Dark Bowser so Bowser can finish him off. After which, a highly unstable Dark Fawful, in a last ditch effort to destroy both Mario and Luigi, explodes inside Bowser, though not before giving off a psychotic smile. However, this causes everyone to be released from Bowser's body, and seemingly cancels the effect of the Vacuum Shroom. With the mad Beanish finally destroyed for good, the Mushroom Kingdom returns to normal.

Fawful will appear in the game Mario Kart 9 as the main antagonist of the game's Story Mode.

Fawful appears as Medium-mode boss, replacing Dr. Eggman, Like Eggman in easy mode, he appears at the end of Levels in Green Hill Zone, And in boss level, unlike Dr. Eggman, Fawful flys with his Vacuum Helmet, and rides a green giant robot instead of Dr. Eggman's giant robot, and he will attack Mario by shooting bean bombs from his Vacuum Helmet in levels at the end, at the boss level, he will try to crush mario, with the robot hands or the feet (if the robot hands are destroyed)

Fawful, along with Cackletta, are set to appear in the comic, Super Mario Memories as two of the many villains revived by King Polarite. They are notably less powerful than they were in the original games they appeared in, and are seen as henchmen to King Polarite rather than main villains themselves. Even so, they are quite formidable opponents.

Fawful has not made an appearance as of yet, but he was given a mention in the fifth chapter. According to Francis, Fawful stars in his own TV show called "Fawful the Furious", and is up to its 128th episode. Francis later played a clip from the show in Part 14, where Fawful exclaimed his trademark "I HAVE FURY!" catchphrase.

Fawful, alongside Cackletta, was also given a mention in the thirteenth chapter by Birdo. She cited the events of Superstar Saga, claiming that she didn't understand how Princess Peach was always unprepared for Bowser's frequent kidnappings of her, despite the fact that she was able to predict Cackletta and Fawful's arrival (who had only shown up at the princess's castle once). 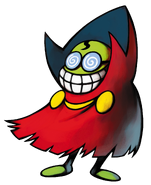 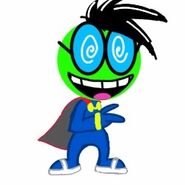 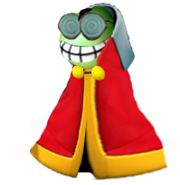 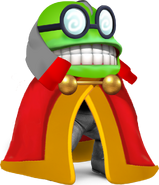 Fawful as he looks in Super Bowser RPG:Legend Of The Seven Shells. 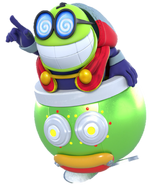 Fawful as he appears in Super Smash Bros. Universe.