Farfetch'd, known in Japan as カモネギ (Kamonegi), is a Normal/Flying-type Pokémon. While it is not generally known to evolve into any other Pokémon, Farfetch'd from the Galar region are capable of evolving into Sirfetch'd.

Farfetch'd is a pale brown duck with a cream-colored underbelly. It has a large, sharp, yellow beak that resembles the bill of a duck. Its face consists of two large eyes with long, brown pupils, as well as a marking above its head, resembling a V. Atop its head are three feather plucks. It has yellow legs and its feet have webbed toes. Its wings are as large as its body, have the same cream-colored underside, and are prehensile, meaning the wings have adapted to grab and hold things as if they were regular hands.

Farfetch'd's trademark item is a stick that resembles a leek stalk or a spring onion. Farfetch'd always carries this stick around, whether it's holding it in its wings, beak or feet. Since it is unable to live without this stick, it defends it from any attackers with its very own life. Farfetch'd can also use the stick itself as a weapon, as if it were a metal sword, to cut all sorts of objects around it. Farfetch'd can also use the stick as a tool for building its nest. Apparently, there are several kinds of sticks, some good and some bad, and since each Farfech'd wants a good stick over a bad one, they occasionally get into fights over the sticks.

Farfetch'd also seem protected over the growth of the plants of its stick. If anyone even disturbs the location where the sticks grow, Farfetch'd attacks the intruders with its own stick. Farfetch'd may eat its own stick in case of emergency ration. If it does so, it runs off desperately in order to find a new one. Farfetch'd appear to be very elusive, and thus it is thought to be an endangered species of Pokémon. In order to prevent extinction, people try to let Farfetch'd breed with each other.

Farfetch'd is a visual pun on the Japanese proverb 鴨が葱をしょって来る Kamo ga negi o shotte kuru, which translates to "a duck comes bearing green onions" (Farfetch'd holds a leek-like stick that resembles the green onion). This metaphor stands for "something surprising but convenient", and can also be simply shortened to 鴨葱, kamo negi.

Farfetch'd is a corruption on far-fetched, which means "unlikely". It may also come from Fetch, in reference to Farfetch'd holding a stick.

Kamonegi is a combination of 鴨 kamo (wild duck) and 葱 negi (spring onion or Welsch onion). The term 鴨葱 kamonegi also comes from the Japanese proverb 鴨が葱をしょって来る ("a duck comes bearing green onions"), which means "something surprising but convenient". 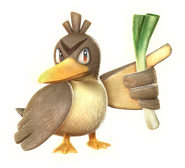