Fantendo - Game Ideas & More
Register
Don't have an account?
Sign In
Advertisement
in: Free to use Characters, Characters, What is the New Fantendoverse?,
and 12 more

Fanti is a character that appears in the Prodigy series. He is Unten's closest friend, figuratively and literally and aids in generating electricity for Unten's attacks in the series. In Tragedy (2015) he is revealed to be a former Narobi-Tron robot who managed to output their consciousness into a solid form, causing him to be banished from the kingdom and eventually meet with Unten. Fanti sacrifices his life by possessing UNT3N's body and forcing the two off a cliff.

He later appeared in Xerra: The Last Beorn Volume 2 as part of UNT3N's body, keeping it from killing Xerra. During the countless centuries that UNT3N and Fanti have been conjoined, the two are still at battle with each other, even as the head is the only thing that remains of the original UNT3N body.

Fanti is first seen in Fissure (2014) in the Narobi-Tron outskirts. The reason for his banishment is unknown until Tragedy (2015), where it was revealed that he was a former Narobi-Tron who was outcast for outputting his consciousness into a solid form. He meets Unten in the Outlands and helps him out in exchange of exiting the Outlands.

He has electrical powers and can stretch his body up to 9 feet. This is useful for attacking at a distance or grabbing far away objects. 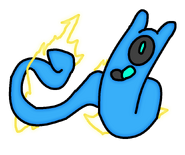