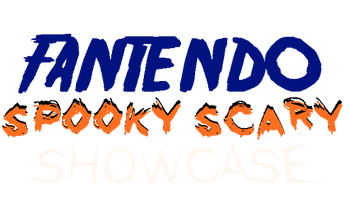 Hello everyone! It's that time of year again - spooky scary Halloween, and with that, another Fantendo Spooky Scary Showcase. This is Button Studios' first appearance at this showcase, and with it I'll be showing Button Studios' third Button Direct. This presentation is going to be shorter than most others, as I'm only going to be focusing on three games that I'm working on. Unfortunately, this won't be entirely "Halloween" themed, but I hope you'll enjoy it nonetheless!

I've teased off Draco Duel for a long time now, so I think it's finally time to start sharing info about the game. Draco Duel is essentially my own take on a fantasy fighting game - inspired by games I've played including Pokkén Tournament, Street Fighter V and ARMS, which revolves around three-dimensional battles between two characters in an arena environment.

Ultimately, the goal of the match is to wear down your opponent's HP to 0, but that's easier said than done, as all characters have powerful attacks and special defensive moves that can stop that from happening. Matches last five minutes, with a short break at the two minute and thirty second mark. If neither participant has been defeated at the point, one of two things can happen, depending on what the player chooses.

But at the end of the day, competitive fighters are all about the roster! That's why I've worked hard to make each character feel balanced and unique. I'll show four characters today, who I've been working on recently. I plan to include around twelve to sixteen characters in the final game, but things can change. Anyway, let's show the characters!

No two characters are the same, and each experience you have using a character will be unique. Take Vahala, for example, who sacrifices defense and stamina for dangerously high offense and speed. Or Yannis & Yasmin, who move around very slowly, but deal damage twice for every attack. Or Selesté, who relies on spells and potions to attack from a distance rather than close range. Or Dimentra, who can use close-range attacks from anywhere on the field thanks to her interdimensional portals.

Of course, Draco Duel isn't just going to be a fighting game. As well as multiplayer, which can easily be set up using several Nymbus systems, either on local area network or over the internet, we're including an intense Single-player campaign with a story. This will be an intense series of fights between the player and computer-controlled characters, who will learn from the player's techniques in battle.

Tournaments will be a major feature of online play. We've not decided the date or time for the first tournament, but it will be shortly after launch, and players will be able to compete with each other in a huge elimination-style knock out competition, with thousands of entrants! Earlier rounds will take place over online connection, but if you make it to the Top 16, you will be invited to a special event, with prizes including Nymbus systems, vouchers, free games, and more. You'll even get a participation prize just for registering. We plan to hold tournaments every 2-3 months, so make sure to look out for any announcements.

That's it for Draco Duel. Please be sure to check out its page when it goes online, and look out for any character announcements! Now, to move on to one of my older projects. 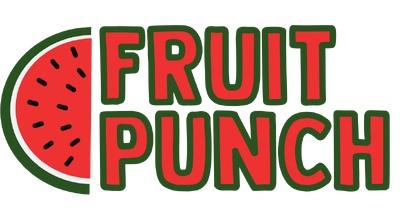 Fruit Punch, a colorful platformer about solving puzzles and slaying strange enemies, launches on November 12th on the Nymbus. As you know, there are six worlds in this game, and each one has a powerful foe at the end. Today, I'll show off the bosses in the game, as well as some other announcements about the game. 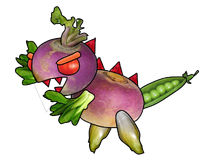 First, we have Turnipasaurus, the dangerous repitilian monster that wanders Fruit Forest. Turnipasaurus is a deadly foe who was created by Dr. Vegtebloid to stop Punch from finding him, so the fight will be a challenge. Fortunately, Turnipasaurus' weakness is his own attacks - if you can find away to reflect his fiery breath back at him, you will be able to survive and claim a Golden Seed to advance to the next world. 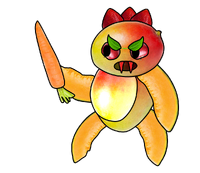 Here, at Carrot Falls, Punch encounters Mangoo, the wandering leader of the monsters at the falls. This boss will be a little different to the others, as Punch will need to rely on using a Vegteblade, an ancient vegetable weapon, to duel with Mangoo and claim the Golden Seed. Watch out for his feint attacks and flurry rushes, which can catch the most skilled vegetable swordsman off guard. 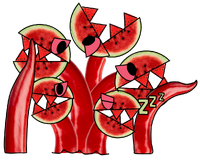 After sparring with Mangoo, Punch will explore Watercress Sea, where he is ambushed by the sleeping titan of the ocean - Melonmaw - who sees Punch as a mere snack. However, since Melonmaw is made of many Melonmouths, it is very weak to Punch's Cocoboulder attack. Use this attack on Melonmaw's five heads to claim the prize of victory - a Golden Seed that lets you advance to Parsnip Peak. 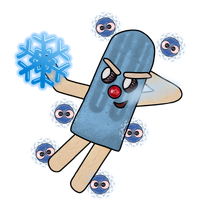 Here, the air is cold, so Punch will need to find a way of getting around without freezing solid. At the very summit, in the heart of a blizzard, Punch meets the icy emperor, Popsicle, and his army of Chillberries. Popsicle is dangerously cold, and touching him will make you freeze, but this also means that Popsicle is extremely weak to heat - use any form of fire, warmth or magma to melt him down into a puddle! 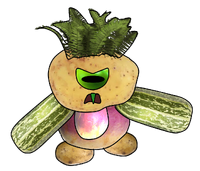 Next, Punch will fight Asparogre, the leader of the Asparagoons in Broccoli Woods. As you might be able to tell, Asparogre's prime weakness is his sole, giant eye. If you can deal enough damage to the eye using ranged attacks such as the Seed Popper, Asparogre will be no more and the Golden Seed will be yours, allowing you to travel to Fort Vegtebloid to rescue Cordia! 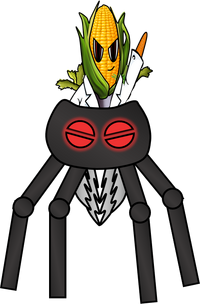 At last, Punch's final obstacle before saving his sister, is the kidnapper himself - Dr. Vegtebloid - and his latest creation, the Blender, a mechanical monstrosity that will kill Punch in one hit with a successful attack. Defeating Dr. Vegtebloid requires precise timing and skill. If you don't know what you're doing, you'll be stuck for a while. But, if you endure many attacks, Vegtebloid will be defeated and victory will be yours!

That's it for now. I've decided that the Fruit Punch project will go on hiatus for a little while since I've been struggling with ideas and been focused on other projects, but I will most likely come back to it another day. Now, onwards with the presentation!

The project I've been working on the most recently is in fact Pokémon Infinity, the upcoming premiere release of Generation VIII! As you know, many new Pokémon will be included, so I'll reveal a few more. Let's see - how does 8 new reveals sound?

That's not all though, because as you may have already heard, an all-new feature is coming to Pokémon Infinity. In Kalos, we had the introduction of Mega Evolution, a powerful transformation that certain Pokémon can undergo. In Alola, we were introduced to Z-Moves, incredibly powerful, one-time use moves that completely transform the battle. Now, in Omnis, Mega Evolution and Z-Moves have been combined to create... Z-MEGA EVOLUTION!

In order to undergo this Z-Powered change, the Pokémon must be equipped with a Z-Mega Stone. Next, the trainer has to equip both the Z-Ring and the Mega Ring in order to utilise both powers at once. When the Pokémon uses their Mega Z-Move, the power of Z-Mega Evolution will be awoken, but only if the bond between trainer and Pokémon is perfect. After transformation, the user must wait for one turn to recharge, but after that, they become extremely powerful and potent. 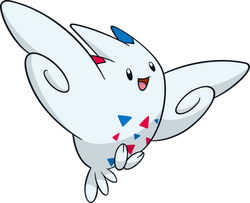 Z-Mega Togekiss
Add a photo to this gallery 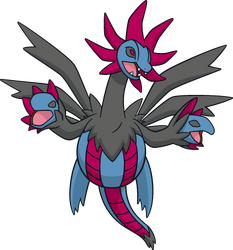 Z-Mega Hydreigon
Add a photo to this gallery

In Pokémon Infinity, we are introduced to Stardust, an aspiring champion who desires to uncover the secrets of Z-Mega Evolution in Omnis. Together with the player and her Pokémon, they will search the land for clues. But there's not much time, as Team Zero are also looking for Z-Mega Stone for unknown reasons. Could it be something to do with the dimensional rifts and time distortions that have been taking place, or the recent kidnapping of Professor Baobab? Only time will tell, when Pokémon Infinity releases on December 10th 2018!

I've also sorted by projects in order of priority, and I likely won't be starting any major projects until most of these are complete.


That's all for now! Sorry it wasn't the longest of annoucements, but I would really appreciate it if you could tell me what you thought in the comments below!

Retrieved from "https://fantendo.fandom.com/wiki/Fantendo_Spooky_Scary_Showcase_2018/Presentation/Button_Studios?oldid=2795526"
Community content is available under CC-BY-SA unless otherwise noted.