The trailer begins with a small white flash on a black screen. Then, the camera pans down to a scene of Unten, Silver Zin, Nyxiel and Redge fighting on Peaceful Plains. The battle starts off even, but a minute in a Finisher Orb spawns, which Unten grabs, activating his Fan Finisher. Whilst Unten is activating his Fan Finisher, the screen becomes filled with lightning in slow motion, eventually covering the entire screen in white. Then the following is announced:

Fantendo Smash Bros. Combat inherits a lot of its gameplay from its sister Super Smash Bros. Combat (erictom333). However, it also takes in mechanics from previous FSB titles (like Victory and Nil), such as dodging and countering, breaker moves, move staleness, rage damage, and super damage[1].

Fantendo Smash Bros. Combat starts off with 13 characters (Dragon Queen, Unten, Strafe, PalmMan, Alice, Pesh, Zerita, Aingeru, Rachel, Bowie, Leah, Fera and Silver). There are a total of 66 characters in the game (excluding DLC), each with their own unique moveset and playstyle. 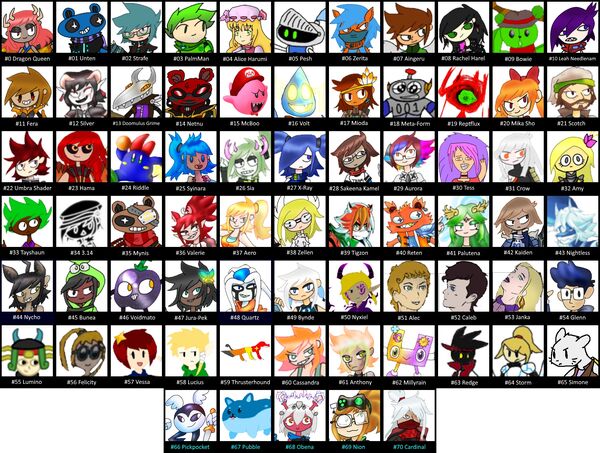 Every fighter has 7 distinct alternate costumes. See here for info.

Fighters #13 through #65 are not available by default, and must be unlocked. They can be unlocked by random after battles, of in Adventure mode.

Fantendo Smash Bros. Combat has 54 stages to choose from, each with different shapes and hazards.

Fantendo Smash Bros. Combat has 23 bosses, fought in Arcade mode and during some spirit battles. They are also fought in Boss Smash.

Fantendo Smash Bros. Combat has 14 different items, any of which could fall from the sky at any time (provided items are turned on.)

When a Summoner Orb is attacked, one of the following 18 characters will be summoned.

This game was inspired primarily by Fantendo Smash Bros. Nil and Victory.

This gallery contains all art, minus series symbols, commissioned specifically for this page.

Retrieved from "https://fantendo.fandom.com/wiki/Fantendo_Smash_Bros._Combat_(erictom333)?oldid=3292718"
Community content is available under CC-BY-SA unless otherwise noted.