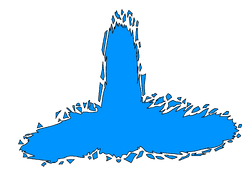 The series is heavily based on Super Smash Bros., which uses a similar premise for Nintendo content. Many games outright clone the Smash series' gameplay, while others make gameplay changes and additions, or stray from the platform fighter style.

The first Fantendo Smash Bros. game was created by RedYoshi (t∣b∣c) in 2009. Since then, FSB has become strikingly popular among Fantendo series. Various users have created at least one project bearing the name every year, as of 2021. 2015 saw a record of at least 28 known games, with 2011 coming closest before it. A shared multiverse of continuities has even been developed, which is used to bridge specific entries and side projects together.

Fantendo Smash Bros. games are free to create, although permission usually must be sought for the content to be represented in the games.

Other continuities alongside the New Fantendoverse

With a boom in Fantendo Smash Bros. games across the board, many games continue to take place in other continuities, or are not explicitly stated to be part of the New Fantendoverse.

Like its beginning, the time period around the end of the New Fantendoverse also marks a shift in the series. With no central shared universe for some time (Fantendoverse τ being planned but canceled), other users begin to make the most notable Fantendo Smash Bros. games, and there is a spotlight on various characters who were not in the New Fantendoverse.

Construction area! This page is a work in progress, and should be completed soon.

As a long-running crossover, the Fantendo Smash Bros. series pulls together content from many other series.

A dagger† represents that the series' article has been removed, although some of its games may still be available to read.

As of December 2021, there have been over 1000 playable characters across all games in the series. The characters with the most playable appearances include Unten, McBoo, Pesh, 3.14, Leah Needlenam, Strafe, YoshiEgg Nook, Zerita, Ella Metals, and Volt.

Different forms and interpretations of the same character should be merged for convenience, especially if they are consistently alts of other characters. Exceptions may be made for many alternate-universe versions of Fantendo characters who are distinctly separate characters in several immediate elements, such as name, appearance, personality, or backstory. Due to the various continuities at play, a balance should be struck.

Only playable characters are listed in this section, not assist characters, bosses, or NPCs who have never been playable in the series.

A dagger† represents characters whose pages are removed. They are listed for historical completeness, but they should be unlinked, as many have been deleted by author request.

A boss is a non-playable character that appears as a strong opponent in specific circumstances in one-player modes or on certain stages in multiplayer modes.

Most of the Fantendo Smash Bros. games have their own original bosses but few of them came from other Fantendo original games (mostly the Doomuli, Unten's "clone" -like Netnu, Fake Unten, or Reten-, or "The" deities from the Fantendoverses -Like The Enemy or The Threat-). As for now, in December 2021, only Ghroth the Harbinger, King Cube Kilobot, and Mistress of Weird made three or more appareances as Bosses across the series.

An impressive amount of different characters appeared as Assist through the FSB games. As for now, in December 2021, only Boare, Friday Blake, Muffin, and RedYoshi made three or more appareances as Assist across the series.

Inspired by the Super Smash Bros. series, characters fight against each other in a 2.5D environment, using special moves that are unique to a single character, and items that hail from many of Fantendo's series. Characters sustain damage, which is indicated by a percentage at the bottom of the screen. The higher the percentage means the character takes more knockback from attacks. To knock out a fighter, one must simply blast them off-screen.

An item is an object that either randomly appears on-stage during a match or is summoned by a character's special move, that can be picked up and used by characters. Many items can be wielded once picked up, while others apply an effect, and almost all can be thrown at opponents.

Some items are taken from a previous Fantendo game, from the Super Smash Bros. series, or are exclusive to the Fantendo Bros. series.

Following, it's the list of original items present in at least two Fantendo Smash Bros. games.

A stage is a location in which characters fight or complete objectives.

Following, it's the list of original stages present in at least four Fantendo Smash Bros. games.