Fantendo Racing Legends is a racing game that involves characters, objects and other elements from the different Fantendo series. It is a game for the Wii U and is in development by Shooting Star Studios. In this game characters will ride on hovering gears against gravity and have partners as well as Special Abilities.

Characters have their own hovering gear on which they'll ride against gravity. Each character has an unique gear and Special Ability, as well as a standard partner. With partner it means that there's a Double Race Mode option, in which two characters ride one gear with one in charge of throwing items and the other riding like in Mario Kart: Double Dash. You can also pair two random characters.

There are also various missions that the player can complete to gain money and buy different customs, such as the option to switch the gears between Boards, Skates, Bikes, Yatchs, Air Rides and Wheels. There is also a Collide More in which 4 players are in a great arena and must try to knock each other to win, as well as other modes to play with. The game has a story that still needs to be announced.

The player can select a character and a course to play anytime. The player receives a ranking depending on how well he/she performed. There are various difficulties, these are: Easy, Normal, Hard and Legendary, with the latter one being an unlockable difficulty.

In Time Trial, the player is able to play any starting course or any course that has been unlocked with the character they desire. Then, the player must reach the finish line in courses while time is counting to achieve time records and save ghost datas. Ghost datas can also be sent to friends via Nintendo Network procedures, and they may also send them to you. There are no items in this mode and the player plays in the course alone.

The number of characters in the game is still unknown. All characters have their default partner for Double Race but they can also be paired with any other 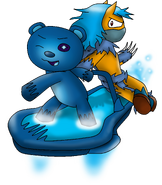 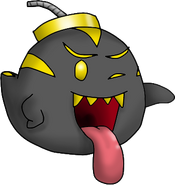 Pesh's and Pashie's partners artwork.
Add a photo to this gallery
Retrieved from "https://fantendo.fandom.com/wiki/Fantendo_Racing_Legends?oldid=3012307"
Community content is available under CC-BY-SA unless otherwise noted.