Fantendo - Game Ideas & More
Register
Don't have an account?
Sign In
Advertisement
in: Articles under Construction, Fantendo Now Episodes, What is the New Fantendoverse?,
and 4 more

Fantendo Now (also known as Fantendo Now! in some countries) is a show helmed by Exotoro that is expected to start sometime during Summer, 2015. The show will be more in depth than any other show before, with title cards and a "summary" and "transcript" page for each episode. Fantendo the Animated Series: The Next Generation will still be going on even as this show goes on as the two are in different contuinites.

Unlike any show before it, there are no "main characters". Each episode can focus "on a totally unrelated character so long as there's a story to tell". With this in mind, most episodes will likely focus on characters such as Unten, Strafe, Leah, 3.14 and the newly introduced Sakeena Kamel.

The show is in the Main Fantendo canon as opposed to an alternate universe. The purpose is to fill it with building blocks that aren't big enough to be standalone.

Takes some place between Season 1 and Season 2. The two episodes were written by DarKingdomHearts (t∣b∣c).

Takes place after the events of Season 1 and Fantendo Sports Resort. Unten and many of the other main characters now live at Boltzmann.

Happen before Victory but after Beorn Hallow and Strafe: Dictator. Each episode focuses on one character and one character close to them that wouldn't really get spotlighted otherwise.

The status of there being a Season 3 is still unknown, but it will likely take place after the events of "Fantendo Smash Bros. Victory". 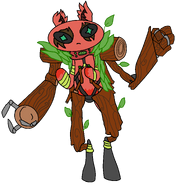