The game is your traditional kart racing game, with items to hinder the performance. It features a Grand Prix, Time Trial and VS mode.

In a Fantendoverse of it's former self, the skies are bleak and all is plain. Happiness must be brought to restore harmony. Old Fantendo heroes meet up to bring light back into the Universe by starting a grand racing tournament.

In total their are 14 playable characters in the game.

There are 4 unlockable characters with 2 more yet to be confirmed.

All of the courses are based around the games the characters play in. 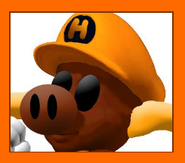 Smile
Add a photo to this gallery
Retrieved from "https://fantendo.fandom.com/wiki/Fantendo_Kart?oldid=2771048"
Community content is available under CC-BY-SA unless otherwise noted.