Hello! Welcome to Inora's presentation! I have no idea why you'd read this when you could be reading far superior presentations, but I appreciate your presence nonetheless.

While we don't have any new consoles to show off or crazy Smash games, I do have a schedule for you. How fun. Honestly the most exciting part of this is our fancy new logo.

Strafe: Lethal Seven is coming along pretty nicely. It will probably be done sometime in January.

NITROS will get done. Expect tons of tracks, characters, and modes. Expect them sometime in February.

Fantendo - Imperium is coming in summer 2016. Pretty much everyone will be teaming up(including characters who haven't crossed over before) to stop the evil Lord Imperium and the rebooted Gray Demon.

GHOST SMILE III is coming after all of these things, so about a year after I started the second one. An older, wiser Smile is joined by Kurt, Isabella, Mart, and Moriss to battle against a brand new villain. With five playable characters, the new Slime Mold ability, an extensive story bigger and better than the last two and tons of Fantendoverse ties, this might be the best.

You probably thought this was absolute shit, but I thank you for reading. Come back if you want.

So people seemed to actually like my boring shit. Cool. 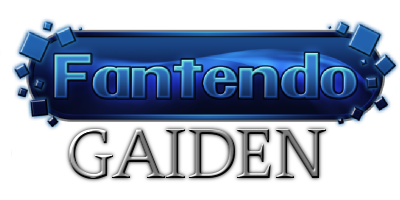 Fantendo - Gaiden: Season 2! Yeah, I talked about this the other day, but today I'm announcing new information about the season: a new Operative!

Vhast is a tall, alien warrior from the planet Biosion, sent to Earth to act as an ambassador for his planet. Vhast is fun, completely oblivious to Earthly culture, and has the ability of opening portals to pocket dimensions where he can store and take out things.

If you want to fully read up on him, you can go to his article!

I hope you enjoyed this info about Season 2, I hope you'll return tomorrow, and I hope you're hyped for Season 2 of Gaiden. I sure am.

Welcome back to our final day here. As I said, Gaiden: Season 2 is coming in spring 2016, but that doesn't mean I can't feed you a bone or two before the season fully releases.

So with that, here's the first episode of Season 2! Fully finished!

Thank you so much for reading this presentation. It could've been a lot better but I hope I have your attention and I hope you'll continue to read whatever bullshit Inora puts out. Happy holidays!

Retrieved from "https://fantendo.fandom.com/wiki/Fantendo_Holiday_Showcase_2015/Presentations/Inora?oldid=1932023"
Community content is available under CC-BY-SA unless otherwise noted.