Fantendo Figurine Fighters (also known as F³), or ('ファン天童戦闘人形' Fantendo Fighter Doll) in Japenese, is a two dimensional Action-Adventure RPG for the Wii U published by Nintendo and Fantendo. It is the seventh game in the Figurine Fighters series. It is also the second game created especially for the Wii U. The game once again features real world Figurines that can be scanned to unlock in-game characters and items, helping the player overcome obstacles and enemies. Cards have also been added, which can be scanned for smaller rewards. Unlike it's cancelled predecessor, only Fantendo characters are featured, and not Nintendo ones.

On September 19, 2012, it was announced that the game would be ported to the Nextgen Solo Neo and a new accessory would be released so the cards/figurines could be scanned. The new boxart was also revealed. It was released on the same day the original was released in Japan.

“On a dark and stormy night in Fantenville, a sudden lightning bolt strikes Imagination Tower. Soon, all of the toy energy held inside scatters into the village and turns each character into figurines! Now, you must find them in the real world and return them into Fantenville to stop the evil Dr. Demented. Can you do it?”
— Blurb, back of box
One day, Unten is walking home when he hears a noise. Startled, he goes to investigate. After searching a bush, he sees a machine and picks it up. However, he accidentally pushes a dial and causes it to release gas everywhere. Soon, rain starts to fall, and Fantenvillains begin to turn into Figurines. Soon, everyone has been turned into a toy, and are warped into the real world. When the first Figurine returns, he sees million of dark soldiers marching in Fantenville. When they look closer, they realize that a giant statue of the evil Dr. Dastardly is being created. A nearby figure whispers for him to come closer.
It turns out the figure is Pesh, who survived the "toy rain". He explains Dr. Dastardly created the machine to create the rain, but dropped it. Now, with all the heroes (and a few villains) gone, he can take over. A nearby soldier overhears them and starts to chase the group. With nowhere else to go, they head into a portal and arrive in Grand Portal Station. There, TaBooki comes and tells them that the GPS has access to all the 'Verses from Fantendo Muiltiverse, and that they must go in and find the Power Orbs to overthrow Dr. Dastardly. They accept the challenge, and head through the first portal.
Spoiler warning: Plot or ending details follow.
Once they find all 8 of the Orbs, they go back through the main portal and find Unten. Instead, upon inspection, they find it is actually Netnu, who attacks the gang. Even after they defeat him, he calls for the guards and they catch the group. In the courtroom of Fantenville, they are sentenced to 100 million years in prison. However, they break out and summon the Orbs to merge them together, creating the Imagiman. The doctor is not one to be defeated easily, however, and uses his own device to become the VilianBot. In the ultimate battle, both forces battle, and the Figurines slowly come back to life and join the Imagiman. In the end, Imagiman picks up the VillainBot and throws him into space, never to be seen again.
If the player unlocks all 30 characters, a new story will be unlocked. Netnu appears, and reveals his evil plan: he will unleash the evil of the Corrupted Essence in the old abandoned factory. Unten and his friends fight through the factory and find Netnu and fight him. But the monster has already been created, and rampages around the city. Unten calls upon everyone to recreate the Imagiman. Before they can make it again, the Essence attacks them and turns them Corrupted. Unten and the last figurine (the one chosen) fight through the evil Figurines until the get to the Corrupted Essence. They then get into an epic battle with the Corrupted Essence, and win. As everyone returns to normal, Netnu is put into prison, but everyone breaks into spontaneous dance.
Spoiler warning: Spoilers stop here.

The gameplay was stated to be "inspired by the Skylander and Banjo-Kazooie games", which is shown by both it's gimmicks and genre. The standard mode of the game is Adventure/Campaign, where the characters and figurines travel through a set storyline, defeating enemies. "Corrupted" figurines can also be found, which are figurines able to be bought that are battled during the story. The corrupted figurines or some other creatures appear as bosses at the end of every World or sub-bosses spread randomly.

The main gameplay mechanic is the ability to scan "figurines", which are small toys resembling Fantendo characters. When scanned with the Wii U Gamepad, they will appear in-game, replacing the previous character. Figurines can be bought in Expansion Packs at various retailers in the real world. The battle system is a slightly modified version of the Kombat System+. Instead of having health units like most KS+ games, it features a % health circle, similar to the one from Super Mario 64. Each figurine has 3 attacks which are used to attack the opponent, along with a basic aura attack involving Imagipower and the ability to jump (or float).

In the NextGen Solo Neo port of the game, the gameplay has been slightly modified to take use of the systems higher specs. A new add-on (the F³ scanner) is also used to scan figurines/cards, as the Neo lacks the feature required for stand-alone scanning. The Neo version of the game comes with the Expansion Pack and Finisher Skills DLC already installed.

The Wii U version of the game uses Nintendo Network in their online mode. Both ways allow players to cooperate with others in Story mode or battle in Muiltiplayer mode. BPOL also allows the player to track battles, tourneys and stats. The Neo version of the game loses Nintendo Network compatibility but gains the ability to connect directly into Shift Online, which has the same features of BPOL.

As with other Figurine Fighter games, F³ has multiple modes to play in.

The Wii U version of the game has more features due to the fact that two screens are present. The player with the GamePad can activate special moves easily by selecting them. When an enemy is hurt, a small block drops into the "puzzle zone", and when a whole layer is filled the player gains a temporary attack and speed boost. After the Finisher Skills DLC is downloaded, it also allows one Finisher Move to be used.

Among the most important gameplay features of the game is the ability to scan special, store bought Figurines with the Wii U Gamepad to unlock them in game. Each figurine has a main move, two special moves and and special ability to help them in battle. All figurines start with 100% health.

Hidden throughout the various levels, worlds and boss fights are special objects, called items, that can help the figurines on their quest. Their effects include health restoring, speed increasing, ability adding and many other helpful things. Woofbot, Meowbot and TaBooki cause more items to generate in a level.

Cards are a new feature in the Figurine Fighters series, and greatly expand the possibilities of the game. Along with Figurines, Cards can be purchased at various retailers, and can be scanned to unlock them within the game. Unlike Figurines, Cards do not add characters but instead do special effects, such as the following:

Each game comes packaged with:

"Finisher Skills" is the first DLC released for Fantendo Figurine Fighters, but second revealed. The DLC adds Finisher Skills, which are powerful moves that can only be used when the Skill Bar (also added) is full. Each character has it's own Finisher Skill, once again adding more diversity to the character selection.

"Expansion Pack" was a DLC released shortly after the Finisher Skills download. It added 4 Figurines to the game, allowing them to be scanned. If they are scanned before downloading, a message will appear, telling you to download the DLC. 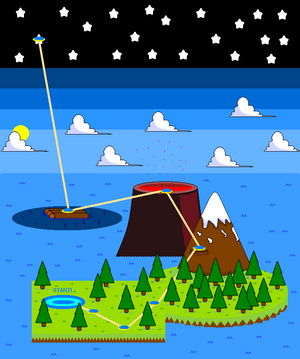 Retrieved from "https://fantendo.fandom.com/wiki/Fantendo_Figurine_Fighters?oldid=3120368"
Community content is available under CC-BY-SA unless otherwise noted.