Hi everyone! My name is KirbiMiroir, and you may know me as Kirbystar247. Today, I'm about to show five projects that will blow your mind.

My most well-known project, probably due to its huge number of comments! Don't judge the game based on the comments, though - instead, you can read the article and have your own opinion. You can keep that opinion to yourself if you want to. 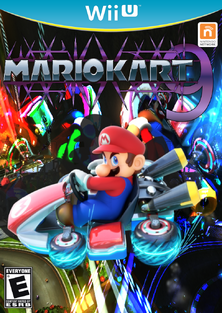 This game is the first Mario Kart Game to be released on more than one console, being for the 3DS, Wii U and Exotoro's V². There are thirty characters, but there are several DLC Characters to buy as well. The new feature of this game is Hyper Powers.

In most cases, you choose a Mario Kart Character purely based on their weight class and, in some cases, unique vehicles. However, with new Hyper Powers in place, every character has their own unique ability that helps them differ from other characters! 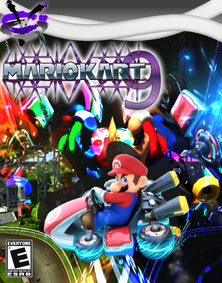 In addition, you can customise the options, allowing you to play in 2D or 3D, and have whichever kind of music you like most. It also shares Emblem Editor and Mission Mode with Mario Kart DS, albeit in improved form.

This project has almost been finished, and has been Sysop Approved as well. I'm planning to make a sequel (even if Blender leaked that fact) some time in the future.

Kirby and the Distorted Realm

This game is coming out for the 3DS, and as an App for The V². A disc for the V² version is still being made (to be honest, I don't know if it even uses discs). 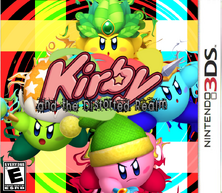 This game takes place in Distortia, a mysterious realm that is both similar to and different from Planet Pop Star. After Dark Meta Knight forces Kirby into this place, cutting him into four smaller clones in the process (sounds familiar, anyone?), Kirby has to explore this mysterious place to find a way out! 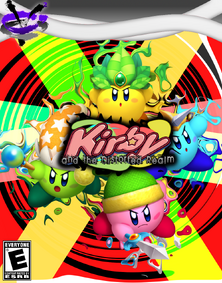 The player has limited ink, which is used up when drawing lines and restored when erasing them. Ink Cartridges can be collected to fill up your Ink Gauge. Also, you might be wondering how you get Copy Abilities. It's simple! Getting hit by an enemy attack with a certain element gives a certain Copy Ability (example: Waddle Doo's Beam gives you the Beam Ability). Helpers also exist in this game.

I'm still working on it, and like MK9, it's been Sysop Approved. Look forward to more features in this game!

Super Mario Bros. and the Secret of the Super Star

The fifth game in the New Super Mario Bros. Franchise. In this game, Bowser has discovered the whereabouts of the Mushroom Kingdom's primary power source, the Super Star. This leads to Mario and friends trying to stop him! (Hey, at least it isn't just "Bowser kidnaps Peach for the fifteen billionth time, let's go rescue her") 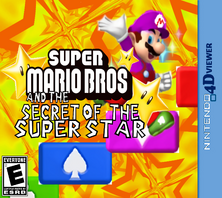 The game is on the Nintendo 4D Viewer, my new console. It plays out similarly to New Sper Mario Bros. 2, but there are two new controls. Press or scroll L for a quick guard that can protect you from certain attacks and projectiles. Press or scroll R for a punch attack.

There are a total of 14 Worlds in this game! Worlds A, B, C, D and E can be accessed through secret paths in Worlds 1, 2, 4, 6 and 7, respectively. Each has a Fanon Koopaling at the end as its boss. 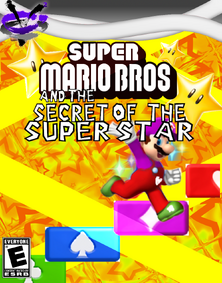 This project hasn't been Sysop Approved, but I am working towards such. I'm planning to have two Minigames in it - Super Mario Chess and Super Mario Stratego. Hope you like it!

Note: Do NOT get this confused with the comic by Crunch (t∣b∣c)

Another multi-console game, this time for the 3DS, Wii U, Nintendo 4D Viewer and NX. It plays out similarly to Sonic Colours, but the stages differ from each version, meaning there isn't any harm in buying more than one version!

As well as being similarly to Sonic Colours, it bears similarities to Sonic Rivals, as the objective in each stage (where there isn't a boss) is to beat your rival to the goal.

Wisps also appear here. There are 9 types of Wisps, not including White Wisps, and an additional six can be purchased via Downloadable Content. Each Wisp has an associated Colour Power (save for White Wisps, they just give you a Boost) which can be activated with a simple press of R.

This game is being done at the same time as Secret of the Super Star. Hasn't been Sysop Approved yet, but I'm working towards such!

This game is a collaboration between myself, ITVdude2000, Thektdude and Wga05. It's basically a four-theme game - there are four worlds, each with its own genre and characters, and after completing them you have to complete the Final World, which is a mixture between all four previous worlds.

My world takes place in the made-up kingdom of Loralia. Prince Theodore goes out wandering what his purpose in the world is, only to bump into Ash Ketchum, who is out on his pilgrimage as a "Summoner". On their way to completing this pilgrimage they meet Kirby, who's training to use Copy Abilities to alter the properties of his sword, and Viridi, who- oh, wait. NO SPOILERS!

None of the other worlds have much work done on them. This is really a crazy project that probably won't be Sysop Approved.

This game is a collaboration between myself and Thektdude. It is basically the fourth EarthBound/Mother game (and the third to be released in Europe and the US). It features similar gameplay to the previous EarthBound Games, although there are some new features.

This project hasn't really been started yet. When I do start it, though, it will be pretty good. Trust me.

So, these are my projects, I hope you like them!

Retrieved from "https://fantendo.fandom.com/wiki/Fantendo_9th_Anniversary_Showcase/Previews/Power_Paintbrush_Productions?oldid=2055463"
Community content is available under CC-BY-SA unless otherwise noted.