Welcome to the Ninkancho presentation for the Fantendo 10th Anniversary Showcase. Again, we are honored to be able to participate in this event! We have saved the best for last, and since we have a lot to share today, we will start right away.
A sneak peek at the future of hybrid gaming.

The successor to our Display line of handheld-console hybrid systems has been under wraps for a while now, and it will be a few years before we will be able to show most of it off. We have revealed some of the games planned for the system, and today, we would like to give you a general feel for the system itself. This time, it's no April Fools' Day joke.

The name is Display C.

Like the 3DS to the earlier DS line, the Display C is the true successor to the Display. This means that it's almost fully backwards-compatible, though we have stripped some of the rarely-used features. All of the Display's game library will be playable on the Display C, and you can sync your account information between both.

However, as the C in the name hints, and as we have said before, the Display C uses optical discs. It can use both Display cartridges and CDs. This opens it up to new formats of games, such as the generic Duo-Disk format already supported by other disc-based consoles. With this possibility, there is much less strain on developers to port their work into a proprietary format.

The discs aren't just for games, however. Among a vast swath of other potential, you can listen to old music on the Display C, or insert Blu-ray discs and DVDs to create a portable theater. However, just as the Display C can read discs, it can also write. Insert an empty disc into the system, and it can encode information into formats usable by other devices, such as full-fledged computers. This is no gimmickry; it makes aspects of titles for the console available in even more ways and on even more existing platforms, which especially improves collaboration.

The system itself will be very modular and customizable in design, making game-specific control setups a basic feature.

Finally, the Display C can still connect to the original Display Box for TV gameplay. However, a new version called the Display Box C will be released, also available bundled with the console itself. It is already a general improvement over the original and can even generate 5K graphics.

More info will become available in the following years.

With Project O, arm yourself for gameplay.

After months of planning, designing, and connecting, we are finally ready to reveal the smartwatch that will revolutionize how you interact with our consoles.

Formerly titled Project O, the Show goes around your arm, obviously, but it also goes hand-in-hand with your Display, Display Pad, or Display Pro. It is the Nintendo Switch's smartphone companion app in fully-realized form. The Show allows full access to instances of certain apps when you're away from the Display, and peripheral features for others.

Developers can, for example, provide minigames and extra features that will affect main game progress when, or while, you resume the full Display experience. For online games, imagine what Nintendo is already implementing for Splatoon 2—mainly, game planning and smart voice chat—but on a convenient first-party system that's not even an arm's-length away.

The 4:3 screen supports full touch control, and is the chassis for the control panel on its side. This panel can be removed for quick or sneaky navigation. As you can see in the diagram above, the main controls are a rocker, allowing for left-right or up-down movement, and with a HOME Button placed in the middle; and two buttons, one with a cross and one with a circle, for accepting and cancellation or as action buttons in a game.

The HOME Button on the panel overlaps one on the Show itself, allowing you to return to that menu even if the controller is elsewhere. And thanks to the touchscreen controls, you can ping the control panel at any time, making it difficult to lose. 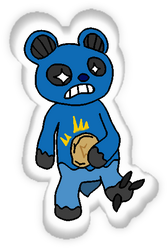 Well, not for long—not as we know him. He is starting to become some other species than Beorn.

His latest predicament was brought about by a witch named Cambira, who wants to recreate the universe in her own image. Changing people's images, frankly, is a specialty of hers. Cambira is an expert on the seven artifacts known as Forment Runes, of which she currently has two. Six were, in ancient times, used to induce transformation magic that would turn the target into a specific species. The other was left blank and never used.

It is unknown what Cambira's exact plan with the Forment Runes is, but clearly it involves cursing Unten with one. The rest are scattered around the world, and it's up to Unten to retrieve them before they fall into the wrong hands—even if he isn't quite feeling like himself.

There are several unfamiliar characters running the competition, and not all of them are trustworthy. Specific people control different parts of the tourney. You will get to know them well throughout the game's plot. Not only the characters are shady, however; those gurgling Fuscurge orbs don't look too innocent, either.

A Ninkancho Direct for Pokémon Chronos and Pokémon Cosmos is upcoming; stay tuned!

Thank you for looking over our showcase this year! We've enjoyed presenting what we had in store, and hope for at least another solid decade for Fantendo. Please feel free to leave a comment below if you have any further questions.

That's about it for this event, so have a fantastic day!

Retrieved from "https://fantendo.fandom.com/wiki/Fantendo_10th_Anniversary_Showcase/Presentations/Ninkancho?oldid=2416806"
Community content is available under CC-BY-SA unless otherwise noted.