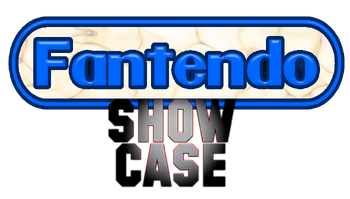 Fantendo Showcase Vol. 1 is the first volume of the Fantendo - Drive series Fantendo Showcase. Volume 1 was released in 2015 and features a ton of brand new characters such as Arthella and Ectoflame. This series can be done by several authors. 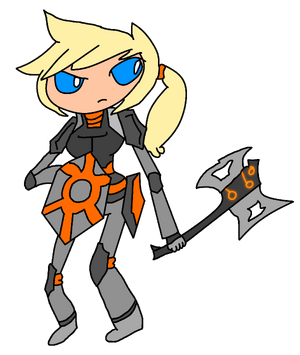 On Huxxabu, a woman with an axe cuts an watermelon in half. Her name is revealed to be Arthella. As the watermelon pieces get dumped into a container to be sold, a thief takes them. As she chases after the thief, the thief heads into the ocean onto a boat, escaping with relative ease. Arthella cuts down a tree in frustration. She then gets an idea.

After calling up her friend Hexa to help construct a boat through magical means, she heads after the thief. Cutting down the mast of the thief's ship, the ship begins to shake as she grabs the watermelon container. Just then, the leader of the thieves goes after her for sinking the ship and they fight in combat.

Defeating the thief and escaping on her boat, Arthella makes it back to the village and sells the watermelon to a mysterious stranger in a cloak who laughs as he takes the container. 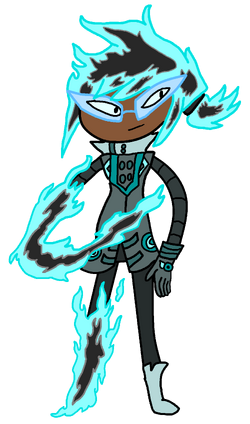 In space, a man turns his hands into flames as he fights a robot coming towards a red and grey planet. His name is revealed to be Ectoflame. As he destroys the robot, he finds that it holds a tracker chip. Suddenly, a ship appears out of hyperdrive, with a mysterious stranger in a cloak commanding the ship to attack Ectoflame with robots.

As Ectoflame blasts the robots, a giant one comes towards him and smashes him between his hands. As the robot believes he's gone, Ectoflame appears behind him and torches the back of the robot, causing it to blow up. As he heads towards the ship, the ship begins to accelerate into hyper-drive and disappears.

Ectoflame returns to the planet, appearing to look like some kind of comet in the sky. As he lands, he finds the Fan and the Enemy's symbol has been marked on the planet, although Ectoflame is unsure why. 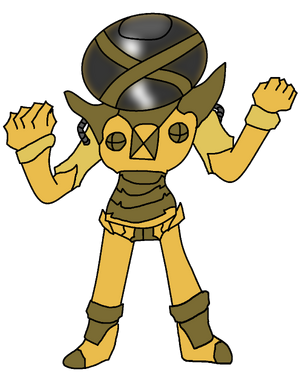 On the highly advanced planet of Alienta, things seem relatively average. People are walking through the streets, businesses are bustling, and nothing is out of the ordinary. One man, a wealthy businessman who runs a large corporation looks out at the planet, smiling and sitting down to drink his coffee. After just taking a sip, he falls over, incapacitated.

Meanwhile, many feet below at the base of the building, a bomb goes off, destroying the entrance and blocking off any visitors or police and taking out the security systems. One guard hides under his desk and survives the blast, running to go see if he can stop whoever did this. The guard goes up the elevator and arrives at the top floor, heading to the CEO's office.

In his place is an armored bounty hunter who introduces herself as Sadisilea. She then shoots the guard with her gun and pulls the CEO up, before throwing him out the glass window. As the CEO splatters onto the ground, Sadisilea laughs before taking her leave. That night, Sadisilea recieves a paycheck, and leaves the planet, searching for her next job.

A man's head rests on a stool, where he is repeatedly shocked before mercilessly being beheaded. The man's head rolls to Liameno's foot, revealing him for the first time. Liameno steps up from his throne and tells a child to toss the body into a tube. Liameno looks at the planets he's marked and travels to Huxxabu, disguising himself with a robe. Grabbing a jar of watermelon pieces, he gives it to a servant and tells him to give it to mailing address.

As Liameno returns to the ship with the servant, he reveals that he had been watching the old man for months and found out that his favorite food was watermelon. Deciding he wanted to kill the man in a ironic fashion, he inserted a killing potion into the watermelon pieces. The servant asks why he chose the old man to kill and the scene shifts to Arthella coming home to find her grandfather dead.

Years before Zeon is destroyed, in a large bustling city full of Beorns, an engineer is working on an escape pod line in the case of emergency, believing that if Zeon was ever threatened, it could carry on the Beorn species. He shuts down for the night, but forgets to lock the building. An orphan Beorn on the run from the cops runs inside, and finds himself with no escape. The police follow the orphan, who hides inside the escape pod to evade arrest. However, he also inadverdently launches the pod, sending it out into space.

The orphan crashes down in Earth, in an alley in New York City. A Ursaring couple, Martha and Thomas Logia, walk by, and finds the orphan. Although he is scared of them at first, they prove their kindness to him, and eventually adopt him. The Ursarings give him the name Hugo, which he happily takes, accepting his new home and better life.

Hugo, posing as a Ursaring, goes to college and graduates in psychology. Eventually he becomes a Psychology Professor at a local college, living a rather normal life. On a day like any other, he walks to his car, but is approached by a tall man in a suit, who tells him that he knows he's a Beorn. This intrigues Hugo, who goes along with the tall man, leading to the events of Fantendo - Gaiden.

On a long lost star in the solar system, the unthinkable becomes reality. During a very special night, the Deities align the stars themselves in a perfect pattern, unaware of what this would cause. Ultimately, the collection of stars form and create a very talented girl, who would change the way the world itself developed as millennial passed, named "Parvati".

Once she became old enough, the Deities decided it would be best to put the new human race to the test, and therefore used Parvati as the test dummy on the planet Earth. After several thousand years, Parvati managed to single handedly turn Earth into her own planet of rule, turning it into a slave-labour focused mess of a planet. Due to this, and the Deities not wanting to harm their otherwise good reputation, they decided to remove Parvati from the planet, and destroy the mess that Earth became.

Parvati's memory was wiped, and she with other test dummies was placed on a new planet, which lead to the events of an upcoming project.

Rubelline, Izuka, Haru, Moltre, and the Listress, as well as many other members stand around a coffin.

Rubelline: So this is how we're spending new years, huh...?

Rubelline looks at her watch.

Haru: Rubelline! This only happens every once in 50 years, you can be patient enough to wait for your sister to wake up.

Haru: It's Dracyi. She is very old... from the 1600s. She is one of Moltre's oldest recruits still around.

Rubelline: Oh that's interesting... is this an old wife or a daughter or...

Moltre: Nah, the rule was not yet established but I did bite many of my wives and children... she is a close friend. We fought against the old vampire hunters.

The Listress: Mhm... a very ancient one.

Moltre: Mm... similar to that friend of yours. The one named after a bird.

Moltre: She travels from place to place as a bat. She loves the night skies.

Moltre cracks a smile. Izuka knocks on the coffin a bit as Haru pulls her hand away from it.

Izuka puts her hands behind her head, as Rubelline looks at the stone coffin again. A glimpse of a man watching from on top of the pillars in the tomb can be seen, yet he remains especially shadowy.

Rubelline: Why does she sleep so long?

Moltre: She stores energy, Red Energy. She'll need a lot of it if she plans to travel the entire globe, especially the hidden areas covered in Distortment Mist.

The Listress: Come on daughters, it's almost midnight. You can save the questions for the woman in question.

Rubelline's clock ticks a minute until midnight. The family begins counting down from 60 as the shadowy man moves quietly.

The shadowy man takes out a wooden stake and puts it in a revolver. We can now see his lips, seeing that they are quite badly scarred.

Rubelline looks back and sees the man. She freezes up, causing Haru to stop counting and try and shake Rubelline before looking in the direction she's looking in. Izuka keeps on counting but is noticing that Rubelline and Haru are acting strange.

Izuka walks over to them to see the man. The man knows he's been noticed, but holds up the revolver anyway, preparing to shoot in...

Izuka quickly throws a red energy katana at the man, stabbing him in the shoulder as he falls over. The stone coffin lid open to reveal the woman inside... 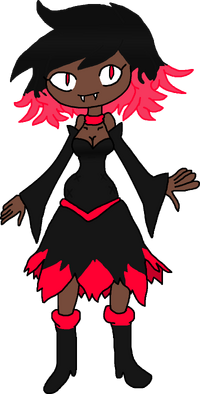 DRACYI AWAKENS FROM HER SLUMBER!

Dracyi looks around as the family watches the man, who we can see visibly now, run out wounded.

Dracyi: Mm, can't have my big moment, can I? Figures he'd be waiting for me to wake up...

Dracyi: Know him? He's Griffin Molor, the vampire hunter who's been on my ass for the past 50 or so years.

Dracyi floats over to him.

Dracyi: Did he try and get you too?

Rubelline: He killed my girlfriend.