This page was made to document special events our Wiki celebrated. Feel free to use the talk page to suggest future events.

In 2010, several pranks were set up. The main page was imported from the dead Brazilian Portuguese Fantendo Wiki, and severely edited from there to be as spammish as possible. The Monaco sidebar was also edited with random things, like an on-going sub-menu chain. Both of them had links to a RanzatsuRoll'd image. The wiki's logo was changed into Dry Skull, and the Site Notice wished everyone a happy Halloween. In addition to all that, the site's name was changed to JesseLand. You can check the last saved version of the main page with the Monaco skin here.

To finish off, Jtolla, a fairly new user back then, was promoted to sysop, and later demoted before she came back. Read about it here

YoshiEgg was handed the task of creating a Easter logo for the wiki. He then had a great idea, hold a contest for users to decorate their own from a template provided, which you can see here. You can see the final version on the right.

In 2011, there were less changes and pranks, but they weren't small. For users of the New Wikia Skin, the wiki suddenly was covered in eye-burning colors. Monobook users suffered even more though, as every bit of text was changed into Webdings, rendering everything unreadable (Unless their Monobook.css file used a different font). Read the blog post here and check out the screenshots below. 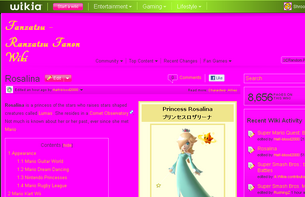 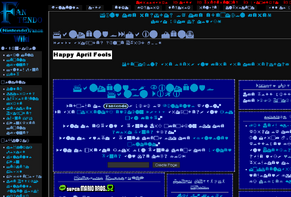 Monobook during April Fools 2011
Add a photo to this gallery

As of July the 1st, users of the New Wikia Skin would see the new Fantendo logo covered in snow. This is so for the users who don't live in America or Europe, but in the continents on the southern hemisphere (i.e. Australia, Brazil), where it "was" winter.

The Halloween events started with the Halloween Series Swap Day, conducted by the creator of the Series Swap Days and veteran bureoucrat JesseRoo. Later, Fantendo was given a orange and purple skin, which received mixed reviews from some, but was somewhat welcome in the community. It also received a logo change. Later on, a logo redesign, featuring Smile, was proposed. However, the old logo got most votes in support, while most opposed to changing it.

After Halloween was over, the logo was changed to one covered in toilet paper.

The home page for Halloween.

The post-halloween logo.
Add a photo to this gallery

In 21/01/2012, the day in which the Nova Squad, conducted by Dk64rules, SonicWiki and Halfblood2000 was announced, Fantendo received a skin re-design created by Halfblood2000 to celebrate the new Sysops. The color pallete changed to red and gold tones, and it stayed that way, with a new background, until the next day. Fantendo received a minor redesign that day, and a new logo, made by Arend, was put up.

The Main Page during the Celebrations.

The main-page after the celebrations.

Arend's logo.
Add a photo to this gallery

Fantendo went pink for Valentine's Day, and with a logo full of a lotta' love!

On the 3/14/2012, Fantendo made maths fun! Halfblood2000 turning the wiki into a Pi wonderland with his blog announcing the changes. 3.14 was honoured and the new skin.

Little would know that 2 days later the Wiki would be undergoing another guise, until Spark01 (t∣b∣c) announced that Friday March 16th would be Whacka Awareness Day. The forgotten Paper Mario character, which Henrydamoose (t∣b∣c) once adopted into Fantendo culture. The Wiki turned Whacka-rrific, with the logo and toolbar colour was changed.

Whacka's page during the day.

Spark01's blog during the day.
Add a photo to this gallery

The Wicked March continued next day, 17/03, in which Fantendo woke up to find itself covered in green clovers and a emerald skin. A new logo was put up, featuring two four-leaf clovers and a pot with gold.

Additionally, users made their avatars green to avoid being shot by a round of dakka.

Due to the recent theme changes, ShadowElise (t∣b∣c) randomly and effectively decided in a blog that Monday, March 19th 2012 would be Ninja Day. Some users also wore Ninja-themed avatars to celebrate.

Recent Wiki Activity during the day.

The Main Page during the day.

Dudebro the Kangaroo Ninja's page during the day.

Megamaster7941 (t∣b∣c)'s avatar.
Add a photo to this gallery

A Kid Icarus theme was planned to celebrate Fantendo's Angels, but it never came to light. Fantendo turned into a My Little Pony fanon, after a failed Rickroll main page. Sorastitch (t∣b∣c) | gave up on drawing and tried to convince us of a warning from Nintendo. And Mariothemovie (t∣b∣c) announced his latest game.

The main page went back to basics to celebrate Fantendo's fifth birthday.

And the Fantendo Tourney was concluded where Ella Metals beat Tucker in a 61-27 victory. 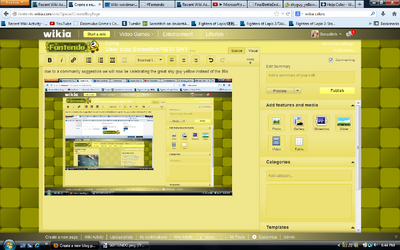 Sorastitch constructed a new 80s theme, which was taken down in less than a day. It was replaced with a new, yellow theme baring ShyGuyYellow's avatar, due to a suggestion by the community.

As part of April Fools Day 2014, Marina (t∣b∣c) created 404tendo for the beginning of the day. The font was also turned into Comic Sans by Lumoshi (t∣b∣c) and also set Vivaldi to play loudly on wiki activity. 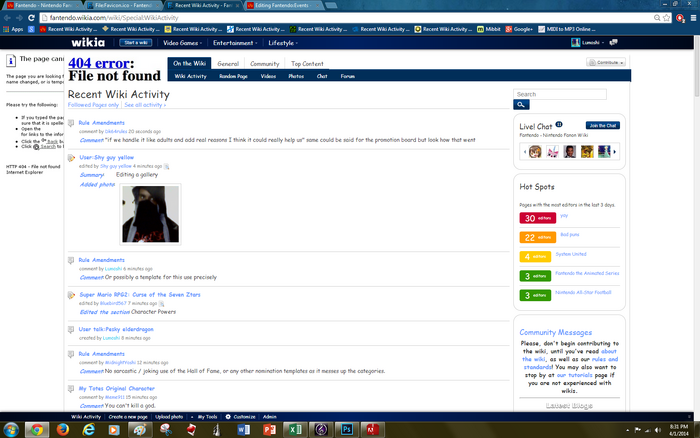 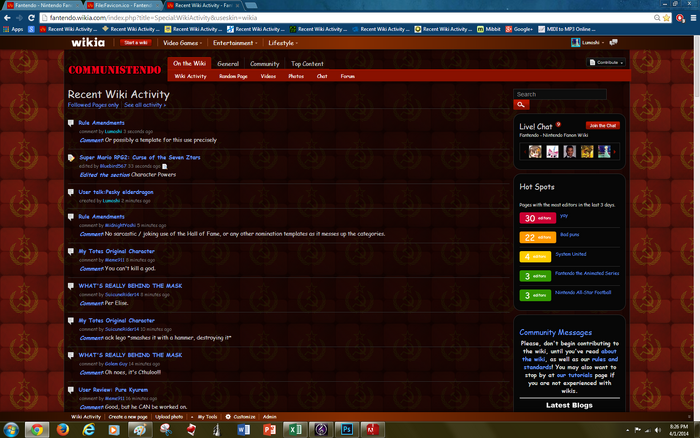 Arend fashioned a skin in April 2014 for the anniversary, as well as several other events, including a showcase, awards, and chess tournament. 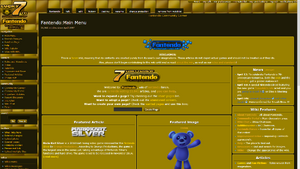 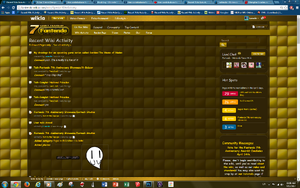 Wikia version
Add a photo to this gallery 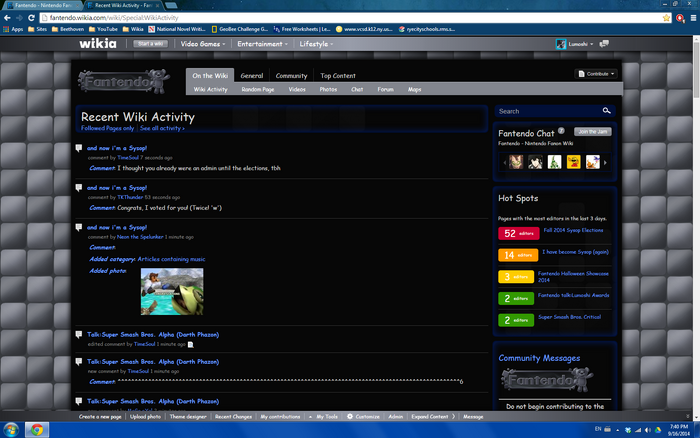 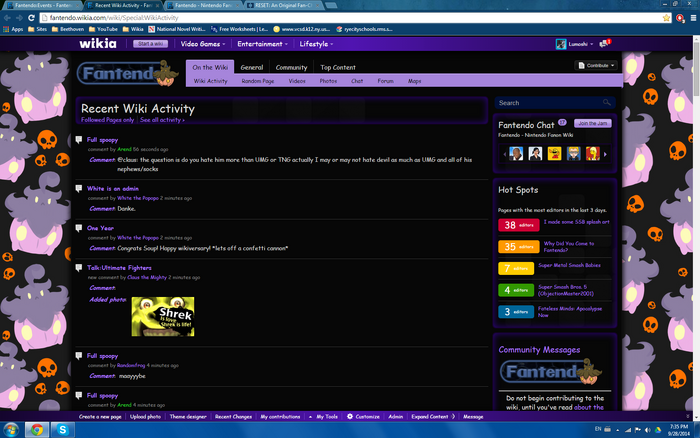 TheSoupyOne made a Christmas skin. 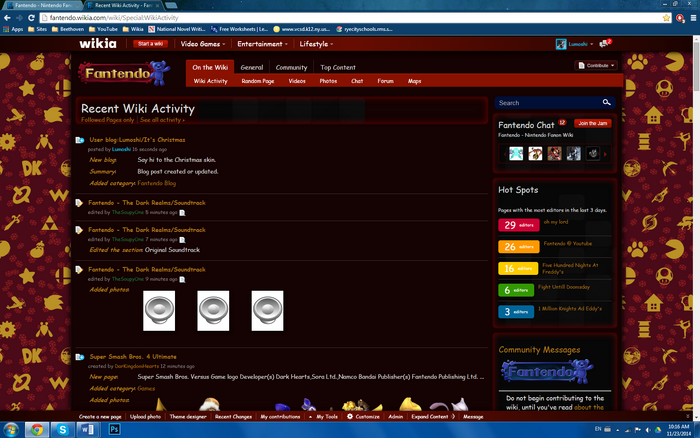 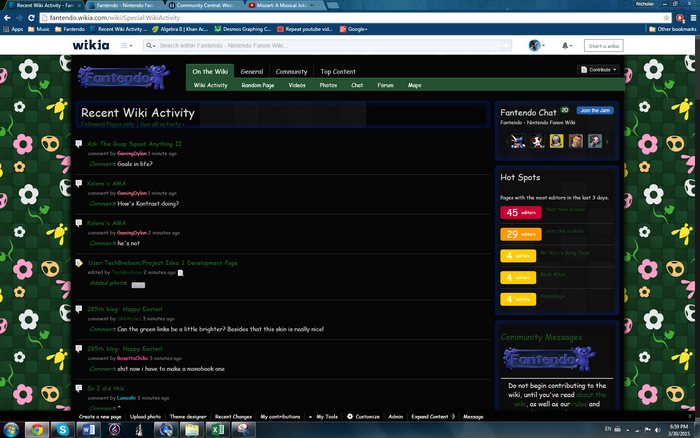 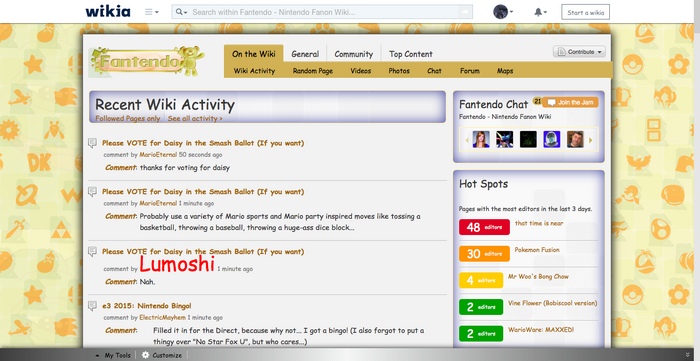 To celebrate gay marriage being legalized in the United States, Trucky (t∣b∣c) made a special skin. 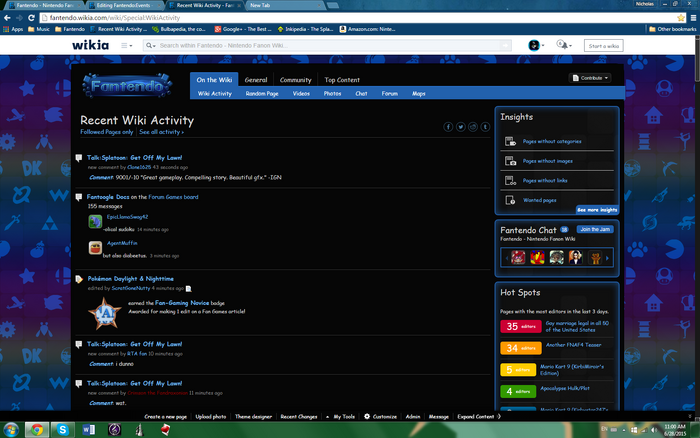 To celebrate Canada Day 2015, Trucky (t∣b∣c) made a special skin.

The skin in monobook

The skin in wikia
Add a photo to this gallery

SonicWiki (t∣b∣c) crafted this skin from bones and pumpkins to celebrate Hallow's Eve.

AgentMuffin (t∣b∣c) made a valiant effort to get this recorded before the deathly reprieve.

Fantendo became the Ready Player One Fanon Wiki to celebrate April Fools. Made by SonicWiki (t∣b∣c). 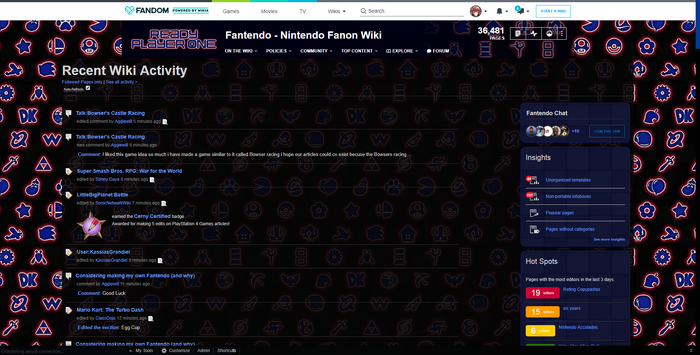 Fantendo decked out for LGBT Pride Month with a rainbow wordmark and background. 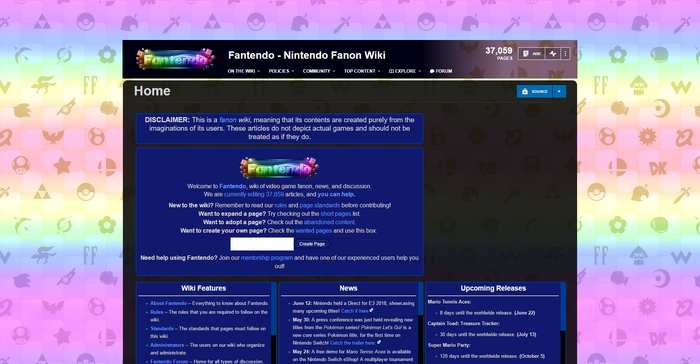 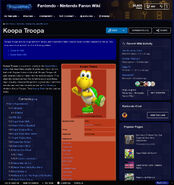 Koopa Troopa’s Page During the day 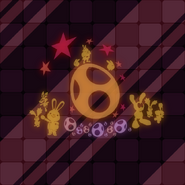 Retrieved from "https://fantendo.fandom.com/wiki/Fantendo:Events?oldid=3066854"
Community content is available under CC-BY-SA unless otherwise noted.