Fang the Sniper, also known as Nack the Weasel, is a character from the Sonic series. He is known for his friendships with Bark the Polarbear and Bean the Dynamite. He makes canonical appearances in Sonic Triple Trouble, Sonic Drift 2, and Sonic the Fighters.

Nack the Weasel was a playable character in this top down game produced by Lunatic Entertainment in mid-2001.

In this game, he was on the bad team, alongside Dr. Robotnik, Grounder, and Mecha Sonic.

Fang makes an appearance in Sonic Heroes 2 as the joint leader of Team Dark with Rouge. Much to the chagrin of Knuckles, this culminates into a love interest.

Fang also makes an appearance in Sonic Party 3, a sequel to Sonic Party and the third installment of the series.

Fang the Sniper appears under the name Nack the Weasel as one of the thousands of characters to appear in this 2D action battle royale. In the game his character is of the dual Gunner-Infiltrator class.

While his weapons do not deal a particularly heavy amount of damage, he is quite fast to make up for it, leaving him as a decent hit-and-run character. He also can summon a hopping vehicle upon which to ride. He is often an early-game fielded character. 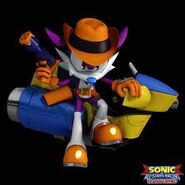