Fantendo - Game Ideas & More
Register
Don't have an account?
Sign In
Advertisement
in: Free to use Characters, What is the New Fantendoverse?, Females,
and 12 more

Fan-Tan-Doe is a mysterious girl who is said to have hailed from Shattered Prime. She is known for her unusual set of powers, which are based off the Catalyst powers but with some differences. She is also known for her unusual liking of Fantendoverse characters, being one of the very few characters that has ever referenced the universes by their proper names. The character was created by Helena Harper (t∣b∣c) as a balance keeper for the original Fantendoverse and as a moe personification of the site itself.

Fan-Tan-Doe is a mysterious figure that nobody really knows anything about, with whatever she says about her backstory being thrown up into question due to nobody being able to remember her being where she said she was. Nobody is sure if she's lying or if the truth is even more complicated than they could have possibly even remembered. She is a catalyst, although her powers are unique in that she can summon things from her memories. This power is dubbed Recall Points. Her powers also unique in that they seem to be drawn from Shattered Prime as opposed to the universe she's currently in, and as such, the Fan and the Enemy want her out of their universe before she causes another Shattering.

Fan-Tan-Doe is a green haired woman who keeps her hair up in pigtails, clipping them together with various Beorn-themed clippings. These clippings effect her powers, boosting her attack powers and other stats. She has brown skin and has blue eyes. She is notably rather short compared to other characters, although still is taller than Unten.

She wears a formal sleeveless dress with a light green collar and a blue tie with the Fan's symbol on the neck of the tie. The back of this dress is mostly bare to allow access to her single eldritch wing, which resembles a variety of tentacles, eyeballs, and feathers. She has arm-length black and blue striped fingerless gloves and wears blue banded black knee-high socks. She wears blue boots.

Fan-Tan-Doe is a odd character due to her knowledge as well as other people's knowledge of her. She knows about Shattered Prime, the universe that was destroyed and created the splinters that would become the New Fantendoverse and the other universes that make up the Fantendoverse Multiverse. However, people like The Fan and The Enemy, who were present for the Shattering, do not remember her during the events of Days of Shattering. She is also a fan of the Fantendoverse characters and notes things about their histories from time to time, which usually just causes confusion among them.

Fan-Tan-Doe is generally easy going although she does hold grudges, which carry on from future and other versions of characters who probably didn't actually set her off. While she can recognize certain characters, she has a hard time telling the difference between all the different versions of said characters. She is a generally pretty curious person, and has created a large tome of all the information she can gather on everyone which she calls "a encyclopedic knowledge bank of sorts- like Wikipedia, a wiki". It is also assumed that she has gotten some of her information from the Book of All from the original Fantendoverse, also known as Shattered Prime, as she has stated that she has read it.

Fan-Tan-Doe makes her debut in Fantendo Smash Bros. Victory as a playable character. She was confirmed on 7/5/17. While she doesn't appear in Days of Victory in the main storyline, she is supposed to be appearing in Aurora's mini-act Purple Skies. She has the unique ability to change her stats using the Beorn Clippings, allowing her to become a better attack or gain more defense at the cost of another stat change that is negative.

Fan-Tan-Doe has the ability to recall memories that she has personally experienced and use them as attacks as a extension of her Catalyst powers. Many of her attacks involve tentacles from the Eldritch beings (hinted to be the Flood from Little Lenny Penguin and the Great Red Flood) that appeared when the Fracture worsened in condition. She also can recall the Shattering and can use it to devastating effect, almost as a nuclear option. Perhaps her attacks hint at her past...

Enemy-Tan-Doe is her friend, whether she likes it or not, often having a somewhat conflicted relationship due to their situation. Enemy-Tan-Doe seems to have no interest in her passion for the Fantendoverse and usually interrupts to tell Fan-Tan-Doe that nobody cares about what's she's talking about or other usually mean remarks. However, this is really only half of their relationship, with Enemy-Tan-Doe seemingly to be a lot nicer off-camera according to Fan-Tan-Doe. 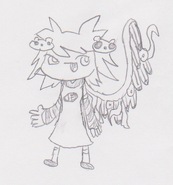