Falco Lombardi (ファルコ・ランバルディ, Faruko Ranbarudi) is an anthropomorphic member of an avian race and ace pilot of the Star Fox team. He is also a good friend and friendly rival to Fox McCloud. Falco has appeared alongside his wingmates , and usually retains his brash, cool, and collected behavior. Although the ace pilot, Falco is sometimes caught in situations in which he cannot escape, and must rely on Fox for assistance but falco was kill by Nikita evil replica clone Azumi.

Falco was born in 19 BLW. His homeworld is probably Corneria but due to a comment he made on Zoness, he may have spent some of his lifetime there. He probably enlisted in the Cornerian Flight Academy, but dropped out and became a rogue pilot. Not much is known after that, but it could be that his life before was filled with recklessness and adventure. He then formed the Hot Rodders with him as leader. He led them for a couple years, until he was asked to join team Star Fox including their new Team mate Nikita where he agreed, although his joining the Star Fox team may have been the result of a falling out between him and his partner, Katt Monroe in regards to irritation about always having to save her that also resulted in him quitting the gang. He had made friends with the leader Fox and was involved in numerous missions.

They tried to get into more missions in situations falco got a Urgent Message from General that Andros's nephew escaped without ever tried to get more into the bottom of this however unknown reasons his nephew kidnapped Nikita as the team was under attack. Meanwhile he was trying to clam Fox down who became very pissed off and between completely angry however a couple of hours of Nikita who was completely sexually harassed and insulted by Andrew falco could not deal of his teammate became kidnap in which he agreed to go to see her as well however the team managed to stop them were doing almost other things to her she told her teammates what he has completely done and immediately want to put the bastard out of his misery for what he's done as Star Fox team left a little they did not know that her evil replica managed to escape from Nikita screaming I am free.

As months went by Andrew who became a team of star wolf and hiding for his crimes including insulting Nikita however Fox was still angry and had completely Nightmares of the complete rape however wolf who threatened Fox to come find him which however Falco insisted that he should look for more clues where their location at Fox told him to be very extra careful out there worried that something was deeply happened to him along his mission he was attacked by an unknown Force Falco was Direct Hit of his ship as he begins to know the unknown Force was Nikita evil replica who look completely resemblance and exactly like her however the two of them got into a fight however she stabbed him in the heart which he died in her hands. 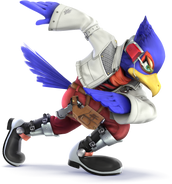 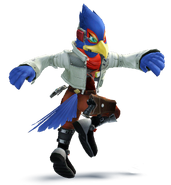 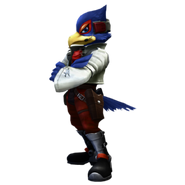 Add a photo to this gallery
Retrieved from "https://fantendo.fandom.com/wiki/Falco_Lombardi_(Future_Timeline)?oldid=2477310"
Community content is available under CC-BY-SA unless otherwise noted.