A Fake Bowser is a Mario enemy disguised as Bowser (but sometimes with a spiked Tanooki tail, as shown in the thumbnail, and with a spiked weasel tail), or a clone of him. They appear in Super Mario Bros., Super Mario RPG: Legend of the Seven Stars (under the name "Bowser Clones"), and Super Mario 3D Land, where they are given spiky raccoon tails.

Mario has to fight seven Fake Bowsers (one in each castle) before he can reach the Faker's Castle and fight the real one. Hitting a False Bowser with fireballs or pressing the ! Switch reveals that they are really just common enemies disguised as their king with a spell (presumably put on them by Bowser and the Princess Faker). The enemies and their attributes are:

Fake Bowser (under the name "Bowser?") makes its debut in the Mario & Luigi series, first appearing in Mario & Luigi: Sage Quest as the boss of Bowser's Castle, and is the final boss Mario and Luigi have to face in the Mushroom Kingdom. After realizing Mario and Luigi are approaching the throne room, Bowser prepared a fake disguise for a Big Tail Goomba to wear, who then proceeds to battle Mario and Luigi. Fake Bowser attacks by performing tail swipes at the bros, throwing hammers akin to Rookie in Mario & Luigi: Superstar Saga and its 3DS remake, and exhaling flames at them. After defeating it, the disguise will explode and reveal the Big Tail Goomba, who promptly flees, ending the battle.

Fake Bowsers appear as boss enemies in Super Mario Maker Chi, being fake versions of Bowser that have their own placement limit of five per subarea. They can "carry" an enemy if the player drags a enemy over to them to replace their death sprite, true to their original appearances in the original Super Mario Bros. and Lost Levels. They stand in one spot and have similar behavior to the original Bowser, although can be killed in 5 fire balls as opposed to Bowser's 20 fireball resistance. 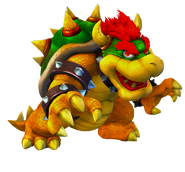 The first Fake Bowser in Gumball and Mario. 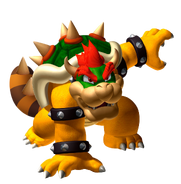 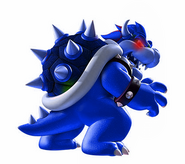 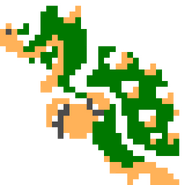 Fake Bowser in the Super Mario Bros. 3 artstyle, by AgentMuffin (t∣b∣c)
Add a photo to this gallery
Retrieved from "https://fantendo.fandom.com/wiki/Fake_Bowser?oldid=3200014"
Community content is available under CC-BY-SA unless otherwise noted.