F.L.U.D.D. makes a small appearance in Super Mario MHL. He helps Mario clean up goop in Water Coliseum and on Daisy Cruiser.

F.L.U.D.D. appeared in New Super Mario Baseball. However, unable to operate by himself, Prof. E. Gadd programmed a robot body for him to control. He is a player for the Super Marios. His stats are as follows:

F.L.U.D.D. appears in Jake's Super Smash Bros. in several different ways, the most prominent of which is as Mario's down special move. After equipping F.L.U.D.D., Mario is capable of using the Squirt Nozzle in order to spray a jet of water to push away nearby foes. This attack deals no damage to fighters, allowing him to also keep those who may be in a helpless state away from ledges.

In Super Mario Maker Phi, F.L.U.D.D was a "Power Tool" that could replace the cursor to fill areas in with two kinds of liquid: water or lava.

In Super Mario Maker Chi, F.L.U.D.D returns as a Power Tool that could replace the cursor to fill areas in with four kinds of liquid, being water, lava, quicksand, or poison water.

In Super Mario Maker Cloud, F.L.U.D.D once again returns as a Power Tool that could replace the cursor to fill areas in with eight kinds of liquid. These liquids are water, lava, quicksand, poison water, tar, tree sap, honey, and ectoplasm. 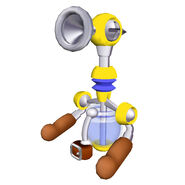 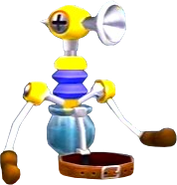 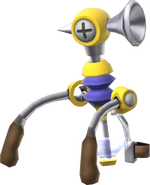