Expresso the Ostrich is an Animal Friend that appears in the Donkey Kong series. He is a large, black ostrich in running shoes and is an ally to the Kongs.

Expresso has only appeared as an Animal Friend in Donkey Kong Country, where he could be ridden after the Kongs break his Animal Crate. He can run faster than the Kongs can, and thanks to his long legs, he can walk over smaller enemies without being damaged such as Klaptraps, though he cannot jump on enemies to damage them. Being an ostrich, he can't fly, but repeatedly tapping the jump button allows him to flap his wings, gaining much more distance with his jump.

While Expresso himself doesn't appear in Mario Kart: Infinity Remix, a Kart body based off of him called the Expresso Express appears that can be customized with any tire or glider. It offers high speed and handling stats, though as a result has lower acceleration and weight stats. 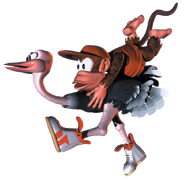 The Expresso Express in Mario Kart: Infinity Remix
Add a photo to this gallery
Retrieved from "https://fantendo.fandom.com/wiki/Expresso_the_Ostrich?oldid=3329301"
Community content is available under CC-BY-SA unless otherwise noted.