Exeggutor (Japanese: ナッシー Nassy) is a dual-type Grass/Psychic Pokémon. It evolves from Exeggcute when exposed to a Leaf Stone.

It has an Alolan form, said to be the original Exeggutor. This Exeggutor is extremely tall and is a Grass/Dragon-type Pokémon.

Exeggutor is a tall, bipedal Pokémon that strongly resembles a coconut or pineapple tree. Its legs and body resemble a tree trunk, and its legs are thick with two-toed feet and a light yellow paw pad on each foot's underside. It has leaves sprouting from the top of its body, and Exeggutor has three to six round, light yellow heads that resemble coconuts, each with differing facial expressions. Each head thinks independently of the others, so it makes a lot of noise as each head speaks its mind. If one of these heads grows too large, it falls off and groups back together to become an Exeggcute. In the anime, Exeggutor also has been seen in groups of its own kind, meaning that it is not a solitary Pokémon. It lives in forests and jungles.

Exeggutor and its pre-evolved form are the only known Pokémon that can learn Barrage.

It appears to be based on a coconut tree, or possibly the Japanese monster Jinmenju, a tree that grows human heads (that are always smiling).

Exeggutor may be a combination of egg and executor. 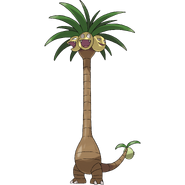 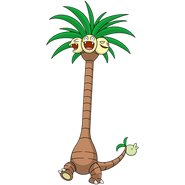