Fantendo - Game Ideas & More
Register
Don't have an account?
Sign In
Advertisement
in: Characters, Females, Based off real life people,
and 12 more

Eva is a character in the Gameboy game, Fantendo Adventure. Her weapons of choice are the Kitchen Knife and the Katana. She later adopts a new weapon, her custom Hairspray Flamethrower that she makes in the second game. She has an evil counterpart from the Void of Darkness known as Ava.

Eva has long black hair that curls slightly at the bottom, she wears a bow in her hair. She has a large oversized violet/purple sweater and a short indigo/purple skirt. Her eyes are bright green and she has a toungue piercing but it is only visable on the promotional art.

Eva is shown with slightly shorter hair, now dyed dark purple. Her hair has glittery sequins in it shaped like stars. Eva now also has a long, carf length black skirt with reflectant star paterns and an Indigo frill along the bottom. She wears a cute pink shirt and a small purple jacket. She has a neclace with a snail's shell on it.

Eva gets bitten by a Zombiefied Brock after setting up a camp in the woods, she later attacks and bites Jorge and is finally put down by Locky and later buried with her Snail.

Eva and her pet snail Shaniqua get killed by a bomb the military dropped in an attempt to kill all the Zombies, Eva gives up her space in the bomb shelter so that Opal would live. Eva is later seen as one of the Zombies who's bodies where harmed but brains where left intact. She whether she is still Zombiefied is still unknown.

Eva commits suicide after watching Angel getting eaten by Ursula.

Eva falls out an open window and falls to her death.

Eva jumps into a cavern after being surrounded by Zombies.

Eva's head explodes when Unten uses his power to try and defeat Marina's Group at the end of the game.

Eva commits suicide in a bathroom.

Eva gets ripped apart by a giant Squid.

Eva get's fed to Rick's group after the group was adopted by a crazy woman.

Eva gets murdered after trying to warn Locky.

Eva gets bitten and chases Sam's group away from their base.

Eva is shot when a teacher thinks she's a Zombie due to her being covered in blood.

Eva dies of hypothermia after staying out side during winter for too long. She is later put down by Sam after attacking Davina.

Eva dies along with Marina, Sam, Rick, Davina and Locky during the Tendo High raid by Nevaeh.

Eva is bitten and eaten after falling while escaping some Zombies.

Eva dies during the sinking of the Sea Diamond and is killed as it capsizes while falling from the floor to the roof in the Dance Hall.

Eva and Angel get along just fine. Angel shows concern for Eva during the events of Angel's Story and shows sorrow after her death. Eva also shows concern for Angel and even commits suicide after he dies along with Ursula in Marina's Story.

Eva and Brochi get along very well, they seem to be close enough for the two to have short conversations without being comanded to do so. Sometimes if the player is playing as Brochi or Eva, if they don't spend enough time together Eva or Brochi will have small fights, but this will happen to all the characters under the same conditions.

The death of Eva and her snail Shaniqua in Brochi's Story beta. 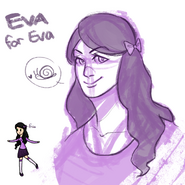