“I was created to wipe you out of this world, and I'll do anything to serve my purpose!”
— Eterna T. Koopa

Eterna T. Koopa is a Koopaling genetically created by Bowser. They contain DNA from every Koopaling, and can use any of their powers.

Eterna is a tall Koopaling with a lilac-coloured shell and lilac shoes. They wear black goggles adorned by purple spikes. Their hair is a combination of the Koopalings' hairstyles, including a tall green mohawk, dark blue hair, light blue mohawks, rainbow mohawks and three small hairs. They also wear several bows that resemble the ones worn by Wendy.

They wield two lilac coloured wands, which they use to perform magic.

Eterna is generally calm and friendly, but naive. They get incredibly stressed and enraged when dealing with Mario.

They were genetically created by Bowser to be the ultimate Koopaling. Upon awakening, Eterna was taught by Bowser how to fight and use magic. Eterna did not understand why they had to fight Mario, but got along with the other Koopalings well.

When the time came to fight Mario, Eterna was soundly defeated despite their power. Bowser was enraged and deemed Eterna a failure. Determined to please Bowser, Eterna started planning ways to kill Mario and appease their creator.

Being a genetic hybrid of every Koopaling, they have access to their abilities, including:

They can also use much of Kamek's magic, including his trademark "shape" magic. When they combine their wands together, they can form a special attack they call the Hyper Sphere, which is a large ball of energy that eradicates anything it touches. 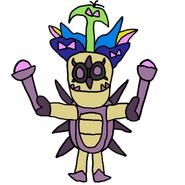 Eterna with no magic spells