Eric Riordan is an attorney and Liam Caster's roommate. Eric utilizes a Strand called bury a friend to fight, with bury a friend representing the guilt he has for letting his boyfriend die. He doesn't get into fights often, pretty much only fighting when someone threatens his friends or his office. He also has an addiction to eCigarettes and is trying to quit.

Eric is a standard build male for his age. He has short brown hair and bright purple eyes, though he often wears red sunglasses or red clout goggles to hide them. When he's at work he wears a purple suit and tie. When he's not at work, he'll usually be seen wearing a teal jacket, a T-Shirt with the entire Bee Movie script on it and grey sweatpants. No matter what, he always wears a pair of Vans inspired by Bruno Bucciarati.

Eric is a pretty "chill" dude. Although he looks very serious most of the time, he's actually pretty funny. Before gaining his Strand however, he didn't act very serious. He was a fun loving guy and didn't take his job as serious. But after that, he became less expressive. He also hates when people discriminate,as in his own words, "If you're gonna be a douche, be a douche to other douches. Don't be a douche to people who are different from you."

Eric mainly fights using the power of his Strand bury a friend. Using bury a friend, Eric can create ghostly coffins and hearses that contain a shared pocket dimension. These can store pretty much anything inside of them except for other Strand Users. bury a friend can also raise the dead as zombies for an hour, unless Eric touches them, in which case they die for good and can't be brought back again. This is not the case for body parts that have been separated from the body.

bury a friend in World Tournament. Artwork by Exotoro (t∣b∣c). 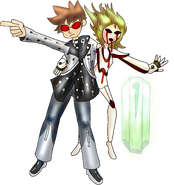 Eric Riordan and bury a friend in World Tournament. Artwork by Exotoro (t∣b∣c).

Official artwork from Fantendo's Card Cataclysm by Puddle.
Add a photo to this gallery
Retrieved from "https://fantendo.fandom.com/wiki/Eric_Riordan?oldid=3221902"
Community content is available under CC-BY-SA unless otherwise noted.