She evolves into Wyvernix when at level 25, and Singearnix At level 50.

Equonix is a small, purple fairy-like Pokemon, looking strikingly like Mesprit. However, there is a somewhat invisible stich over the upper right part of her torso, indicating that the dark heart is within her. There are two tails connected to her rear end with gens engraved into them, and a larger gem engraved onto her forehead. Unlike the lake guardians' gemstones, she cannot be used for the red chain. In fact, her gems are used to store her dark and psychic energy for defensive use.

She may not have any traits that "punish" people for doing something to her(Like looking into it's eyes or touching it), but she does like a lot of attention. Sadly, she'll go in an existential crisis whenever she's all alone, resting in the chamber she was born in, or hiding in a cave.

However, despite her friendly nature, she would fend off anything she sees as a threat, like an attacking Pokemon. Whenever doing so, she refrains from using lethal moves, having the intent on keeping them alive. If she manages to make a pokemon experience a fate worse than fainting, she'll feel bad for doing it.

Her unstable body was a defect from her being genetically created. To prevent herself from suddenly fainting, she has to freeze her body or be contained in a chamber within a hunderd days notice. If she doesn't do it, she'll glow green at the 99th day before fainting the day after.

Her first minor appearance, which appears in the game's "game mode +". It can be found in her lab, but a long chain of events is required to be completed first, followed by aquisition of the Dark heart, which is required to actually use the pokemon.

She appears in SSBR as a newcomer, representing the Pokemon series. Her moveset us somewhat identical to the Lake guardians, but she tosses in her own moves with her.

Her evolutions serve as her alternative forms, each with a unique moveset.

She appears in Pokémon Clash as an unlockable fighter, being unlocked after defeating Dialga in a Tournament. 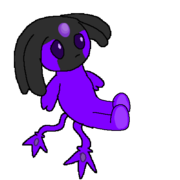 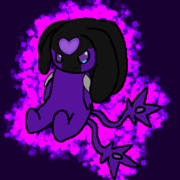 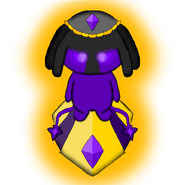 Old Adult form concept. This was ignored in favor of Singearnix 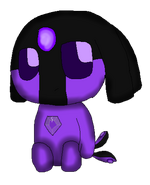 Old Shiny form
Add a photo to this gallery

Pokemon B&W style
Add a photo to this gallery 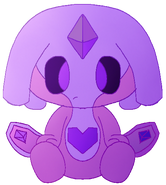 Shiny form
Add a photo to this gallery

Her appearance is based off of two other Pokemon: Mesprit and Mimikyu. It could also be based off of shadows or duplacates, due to the coloration.

Her name is a slightly mispelled version of Equinox.

Retrieved from "https://fantendo.fandom.com/wiki/Equonix?oldid=3284748"
Community content is available under CC-BY-SA unless otherwise noted.