Epic Story is an 8-bit RPG by Phoenix Fire. The game tells a story about a teenage boy named Jake who must save the world from The Sun Priest,  Zern. The game was released on January 24th, 1988 for SNES. It was later added to the Nintendo Switch, as a port from the original.

This is a story, ages old... One that was to be told for generations to come.

And then one day, out of nowhere the protector of the Moon turned on everybody, claiming the Sun was a God that he could become, he could start his own Planet, his own people. There was a massive war between this man and all who attacked him. He converted all of the Children of the Moon to believe in his sinful ways. And so, in response, the Moon sent a fearless hero. The Hero of the Moon. He sealed off the enemy in a special glove he had. However, while this man saved the people, many were killed. All of the diverse cultures fled back to their homelands, and never visited Takhalla again. The descendants of those survivors, are now residing deep in a forest, and Takhalla remains quiet...

Richard: Jake! Wake up, it's your big day!

Jake wakes up, at the crack of dawn in response to this voice. Jake is a 16 year old farmer boy, who lives in the forest village Soki. He lives inside of a windmill, with his father Richard. Richard isn't Jake's real dad, but Richard found him in the Sokian river, which made Richard think that the Moon had given him a gift. He knew that Jake HAD to be a very special individual. Today Jake was going to the job assigning ceremony held in Soki's Fortress, which was essentially the place where the Mayor resided and where all major ceremonies took place. Jakes hope is to get assigned a job as a Soki Guardian, which is essentially a fancy name for Soldier. He gets to protect the village, by going outside of Soki's limited space, into the deep woods of Soki. He has always wanted to go into these woods since he's never been able to. Though he doubts anyone will invade, just the thought of going outside excites him. Something new for once.

Jake gets out of his windmill. 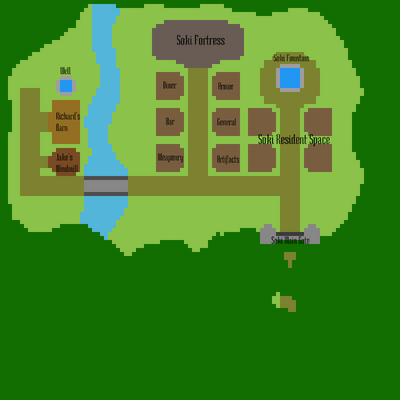 Jake heads over to the Soki Fortress.

Click here to see all locations in full detail

The battles in Epic Story are similar to that in "The Escapists", except more skill is required. You do not get taken to a battle screen like most rpg's. Instead you can just fight them head on using your weapons, similar to older The Legend of Zelda games, except you'll be able to see your enemies health at all times, and you can charge your attacks to have more effect.

Retrieved from "https://fantendo.fandom.com/wiki/Epic_Story?oldid=2921697"
Community content is available under CC-BY-SA unless otherwise noted.