Fantendo - Game Ideas & More
Register
Don't have an account?
Sign In
Advertisement
in: Characters, What is the New Fantendoverse?

Enceladus is a robot created by the USSR, and was intended for use in a full-on war between NATO and the USSR. However, that never happened (as you know, if you have a basic grasp on modern history.), so Enceladus just does whatever he wants.

Enceladus is a relatively tall robot with a rusted red triangle for a head, with a hole cut in it to let his LED eyes shine through. However, after 50 years of existence, the LEDs have since burned out.

Enceladus has two "arms", made from carbon nanotubes. On the end of these arms are circular rubber hands, which serve well as boxing gloves but are otherwise impractical.

Enceladus also has a torso made of carbon nanotubes, which ends in a wheel taken from a car. At one time, he had legs, but they fell off in the early 90's.

Enceladus is rather pessimistic, due to the fact that he has, in reality, no hope of being repaired due to the collapse of the USSR. He constantly bemoans the fact of his impending "death", as well as the fact that the modern Russian Federation is rather poor in quality compared to the former USSR.

Enceladus is also rather careless due to his lack of care about his remaining "life" and his belief that his "life" will end. He's quite a daredevil, or possibly insane, like most other old people.

Enceladus is also very nostalgic to the older days of the USSR, Soviet Union, and the Cold War, frequently reminiscing to the communist rule. He can often be found criticising the Russian Federation and capitalism, which has landed him in prison quite a few times. However, due to the fact that robots seem to survive being hanged, he has never been given death sentence. 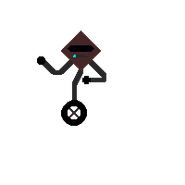