Empress Xzal, also simply called Xzal, is one of the playable characters in K.O.: The Show!. She rules over a race from an alternate dimension, and has come to this world to take it over and claim it for her people. However, before she can begin conquest, she decides to test her abilities in this new world, so she becomes a fighter in K.O.: The Show!.

Though she is of an unknown species, Xzal resembles a tall middle-aged woman with dark-purple skin. She has red eyes and blue markings on her face. Her hair is dark-gray and arches behind her head, being spiky. Her hair also has light-red streaks over it, and her face has four red horns, two on each side.

Xzal's attire consists of a black suit with an opening at the front, revealing her stomach. This suit has blue streaks, similar to the ones on her face. She also wears a similarly-colored strap around her neck with a blue jewel at the front. Her right eye is covered by what seems to be a cybernetic one, presumably replacing one that she lost at some point. She wears arm-long blue gloves on each of her hands, which have a blue jewel at the back of the hand. She also wears blue boots that have light-blue spikes at the front.

Her emblem is a blue face with a line through the center.

Being an empress of her people, Xzal takes great pride in ruling over them. She puts them before anyone else, hence why she was willing to take over this dimension with no hesitation. In battle, she is a ruthless fighter who doesn't hold back from attacking opponents with her strongest abilities. Though she certainly has the power to, she never kills her fellow fighters. Weather this is due to her not wanting to break rules or if she actually sees them as worthy opponents that she wishes to defeat when her empire's invasion begins is unknown. It is also hinted that she isn't using the full extent of her power in fights during K.O.: The Show!, hinting that she is capable of so much more power. Her K.O. Card lists "Having full control, Power, Seeing others suffer, and Broccoli" as likes and "Children, Sunshine, Puppies, and Losing power" as dislikes.

Empress Xzal makes her debut in K.O.: The Show! as one of the game's playable characters. She utilizes dark magic for most of her attacks, and is typically a "fast powerhouse" character. Her running speed is high, especially for her weight class and her attacks have a lot of KO power behind them. Many of her attacks, such as warping through portals and an attack that allows her to throw multiple projectiles at once, are rather tricky to master however, so playing as her will reuquire some learning.

Xzal appears as a summon character in Ghostrealm Heroes. When summoned, she will create a black hold around herself, which drags in any and all opponnets towards her, damaging them.

Empress Xzal in K.O.: The Show! 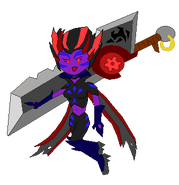 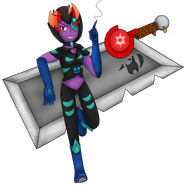 Retrieved from "https://fantendo.fandom.com/wiki/Empress_Xzal?oldid=2848012"
Community content is available under CC-BY-SA unless otherwise noted.